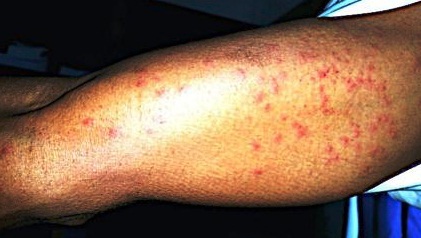 The infestation of a specific plant locally known as tantan (castor plant) with a specific caterpillar covered in hairs and yellowish in colour with black spots has been found to be responsible for the rash.

A communiqué from the Ministry of Health writes that its disease surveillance and response unit had been receiving several reports since Friday February 6, 2015 of clients from the Ramo Estate reporting to the Anse Aux Pins health centre with itchy red rash which was linked to contacts with a certain hairy caterpillar.

Several other districts since then have also reported sighting of such caterpillars and a public health officer who came into contact with the caterpillar has also developed rash.

The communiqué adds that an investigation by public health officers was conducted to assess the situation and to identify the possible causative agents.

Some species of caterpillars have urticating hairs which can cause extreme itching, skin irritations and damage to eyes and the respiratory system. Contact with the stinging hairs of these caterpillars can lead to skin irritation and/or allergic reactions of the skin, mucus membranes or respiratory systems.
The species in question in Seychelles is yet to be characterised, adds the communiqué.
Transmission
. By being near or in the general surroundings of infested bushes or trees. The hairs drift in the air and can be blown over a distance of 200 metres.
. If the nests or caterpillars are touched.
. If work is being carried out and caterpillar hairs which are present on the ground are stirred up: e.g. by raking up leaves, mowing, or clearing up trimmings

Immediate measures to be taken when affected
. Shower immediately, change clothes
. Do not scratch
. Free possible contaminated areas of skin using adhesive tape
. Contaminated clothes should be stored in an air tight container and washed separately at 60 °C, or even hotter.
. The affected areas can be treated with antihistamines
. Should there be extreme itching or other symptoms consult your doctor immediately