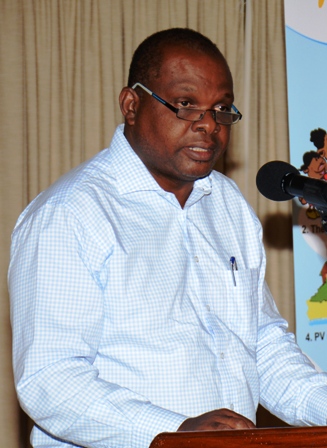 Representatives of government, agencies, organisations as well as other stakeholders in the energy sector yesterday met to discuss Seychelles move from a 100% fossil fuel dependence to a 100% renewable energy consumption.

The Ministry of Environment, Energy and Climate Change in collaboration with the University of Flensburg, Germany is developing a roadmap for Seychelles in that regard which would help us move towards a low carbon economy and meet our commitments under the Paris Agreement.

The discussion session yesterday was a first to present and discuss the process and concept of such an initiative.

“To migrate from a 100% fossil fuel energy consumption to 100% renewable energy is definitely not easy. If it was, many other countries would have done it by now,” Environment, Energy and Climate Change Minister Didier Dogley said in remarks to launch the discussion.

Professor Olav Hohmeyer from the University of Flensburg was among those leading the discussion.

He has developed the first 100% renewable energy proposal for Seychelles which includes the technology to be used, the cost, economic impacts and tax bonus. This he presented to the audience for discussion.

Thanking Prof. Hohmeyer, Minister Dogley said: “We can now use his work as the basis to discuss not whether it (100% renewable energy consumption) could be done but how and when we will achieve it”.

The discussion session yesterday coincided with International Mother Earth’s Day and is also part of the country’s ongoing efforts to promote renewable energy and improve energy security in line with its energy policy of 2010 to 2030.

The principal secretary for energy and climate change Wills Agricole had previously stated in remarks to everyone present that achieving 100% renewable energy consumption for Seychelles is achievable and cost effective given the right political decision. He stressed that obstacles have to be surmounted and one of them is the need to upgrade our national electricity power grid, a critical infrastructure to cope with the surge of renewable energy.

“The Paris Agreement has marked the end of the fossil fuel era and will accelerate the transition to 100% renewable energy use. It has sent a clear and convincing signal to governments and investors to end any new investment into fossil fuel,” Mr Agricole noted.

The Paris Agreement is an agreement within the framework of the United Nations Framework Convention on Climate Change (UNFCCC) which addresses greenhouse gases emissions mitigation, adaptation and finance to start in 2020. An agreement on the language of the draft treaty was negotiated by representatives of 195 countries at the 21st Conference of the Parties of the UNFCCC in Paris last year and was adopted by consensus on December 12, but has not yet entered into force.

Yesterday April 22, on Earth Day, the agreement opened at the UN in New York for signature until August next year. Some 120 states are expected to sign.