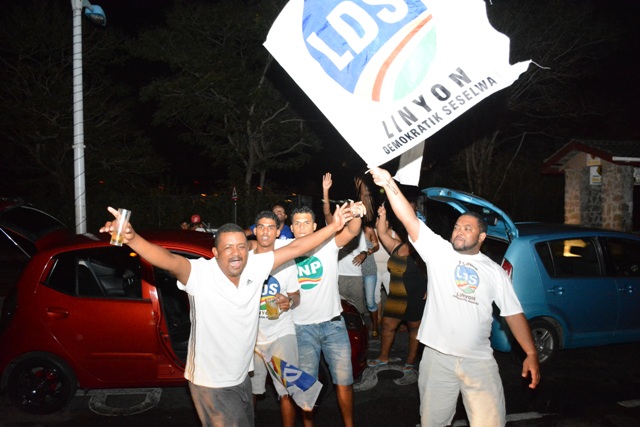 There have been calls for unity and peace by both leaders after the opposition coalition Linyon Demokratik Seselwa won a majority in parliament by getting 15 direct seats compared to 10 for Parti Lepep.

The final results of the three days of voting were released by the Electoral Commission chairman Hendrick Gappy and were broadcast live on Seychelles Broadcasting Corporation (SBC) TV in the early hours of yesterday (Sunday).

The majority of the 71,932 eligible voters headed to the polls on Saturday – the third day of voting – and statistics released by the Electoral Commission show the voter turnout at 62,939 representing 87% of the voters’ population. A total of 1,547 votes were rejected.

This means LDS, whose campaign theme was ‘Fer li OU lasanble’ (Make it YOUR assembly), will hold 19 seats in the sixth National Assembly while Parti Lepep will hold 14 seats.

LDS is a coalition of four parties – Seychelles National Party (SNP) led by Wavel Ramkalawan, Lalyans Seselwa (Seychellois Alliance) led by former Minister and Ambassador Patrick Pillay, the Seychelles Party for Social Justice and Democracy (SPSD) led by lawyer Alexia Amesbury and the Seychelles United Party (SUP) led by Robert Ernesta – as well as lawyer Phillip Boulle who has run for president as an independent candidate a number of times.

The coalition’s supporters took to the streets of Victoria immediately after the results were announced to celebrate the victory under a light shower.

As supporters of the different camps played a guessing game as ballot papers were being counted in the polling stations and contrasting news reaching almost everyone via the social media, the Electoral Commission did well to announce the provisional results as they started coming in. This was a first in a Seychelles election and it was well appreciated, but it was only after 4am that the Seychellois population got the official results after they have been double-checked.

Speaking after the announcement of the results, LDS leader Roger Mancienne said it is a “historic victory”.

“It’s historic because it’s the first time that we have a transition of power in one of the branches of government – the legislature,” said Mr Mancienne.

He added that the transition had occurred in a peaceful and orderly manner.

As usual Mr Michel called on all political parties to celebrate in a peaceful manner and to respect each other’s opinion.

A third party – Seychelles Patriotic Movement – fielded candidates in 23 of the 25 electoral districts. They got 602 votes in total (…….0.98%) which is less than the 10% required for a proportional seat in the assembly.

Electoral Commission chairman Hendrick Gappy thanked partners and stakeholders for having worked tirelessly to put in place the guidelines, regulations and logistics to conduct this election.

“This process necessitated an even better coordination, consultations and training of staff to ensure that all the requirements from existing, new legislation and ruling of the courts are adhered to,” said Mr Gappy, who added that they have received “good feedback in some electoral areas and some challenges from others in implementing the new voting initiative using alphabetical classification to guide voters through the process”.

He also noted that this election was another milestone in the democratic development of Seychelles as we noted “the emergence of new political parties and independent candidates as a sign that this democracy is evolving and more citizens are willing to participate and assume their rights and civic responsibilities”.

“We congratulate the candidates and look forward to an effective representation of their constituencies in the National Assembly,” concluded Mr Gappy.

Parti Lepep held all 25 directly elected seats in the fifth National Assembly and an additional seven proportionate seats after the main opposition party – Seychelles National Party (SNP) – boycotted the 2011 polls which were contested by only one opposition – the Popular Democratic Movement (PDM.