• Re-armament of Somali coastal towns a risk to Seychelles

On March 13, Somali pirates hijacked the UAE owned oil tanker ARIS 13 as the ship was in transit from Djibouti to Mogadishu. The tanker sent a distress call saying that it was being followed by two skiffs before it was boarded. The pirates then turned off the ship’s tracking system and altered course for the Somali port town of Alula.  The tanker has a crew of eight Sri Lankans. The tanker and crew were released three days later on March 16 after what many believe were intense negotiations between the pirate crew, the Somali authorities and the UAE owners. Many believe that a large ransom was paid for the release. The hijack followed a long hiatus in pirate attacks, with only four unsuccessful attempts in the past three years.

The hijacking of a UAE-owned fuel tanker off Somalia’s coast shows the threat pirates still pose.

“This is absolutely a return of piracy,” Alan Cole, head of the UN’s Global Maritime Crime Programme, said of hijacking.

Pirates are still “very much around” and, piracy represents a “setback” he said.

Hijackings in the region caused havoc for international shipping from about 2001 to 2012, peaking with 176 attacks in 2011. They declined in part because of actions by international naval forces, including NATO. The very presence of this international naval force deterred pirates from pursuing their activities and contributed to the suppression of piracy in the region. With no successful piracy attacks since 2012, NATO terminated anti piracy operations on December 15, 2016. The latest hijacking took place just three months after the last naval vessel departed. The figures shown in the accompanying table demonstrate the decline in the level of attacks on large commercial vessels but omits statistics of attacks on dhows and fishing vessels.

Maritime piracy severely damaged the Seychelles economy, reliant as it is on maritime tourism and fisheries. It is estimated to have cost these sectors of the economy tens of millions of dollars. The sectors have steadily recovered since 2012 but any new outbreak of the organised crime of piracy is likely to impact negatively and quickly. Recent budget cuts have largely dismantled Seychelles counter-piracy capacity with cuts in defence and intelligence related budgets. Seychelles needs to work with regional and international bodies to re-establish early warning alerts of pirates setting out to sea so as to be able to forewarn Seychellois fishermen and maritime tourist business owners of the risk of hijackings at sea. It needs to ensure that our coastguard and air-wing are adequately resourced to protect our people and our waters from attack. 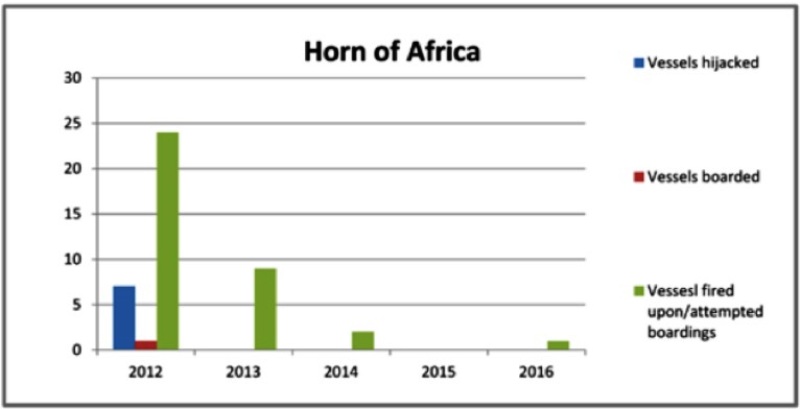