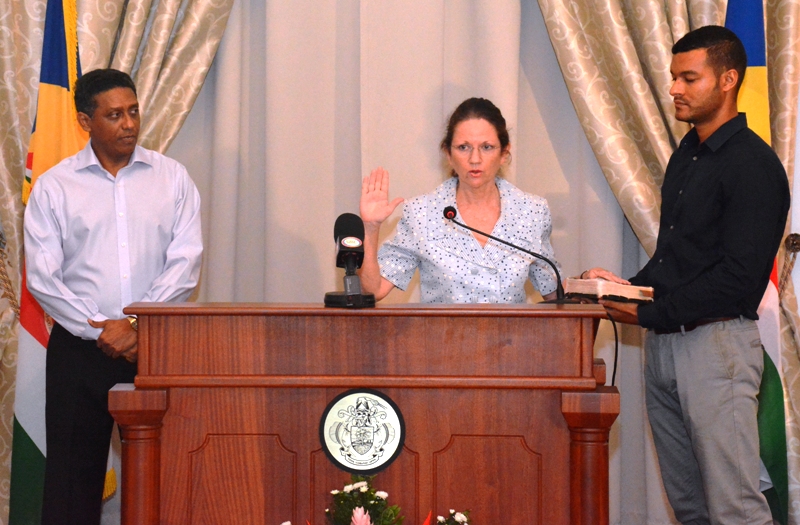 Nicole Tirant-Ghérardi was yesterday sworn in as the country’s new Ombudsman.

She took her oath of allegiance and oath of office at State House in the presence of President Danny Faure, Vice-President Vincent Meriton, Speaker of the National Assembly Patrick Pillay, Court of Appeal president Francis MacGregor and Designated Minister Macsuzy Mondon.

Also present at the swearing-in ceremony were other members of the judiciary, high government officials, families and friends of Mrs Tirant-Ghérardi.

Mrs Tirant-Ghérardi who holds a bachelor of law degree (LLB) from the University of Liverpool in the U.K, is an experienced barrister and attorney-at-law.

The former news editor of TODAY publishers, worked as the secretary general of the Seychelles Chamber of Commerce and Industry (SCCI) from 1999 to 2010.

The new Ombudsman said she now holds the responsibility of a ‘watch dog’, watching over the constitutional rights of people and how they may be affected by those who are supposed to be taking care of citizens.

“That watch dog role means that you watch out for how citizens are being treated especially by their executive and also watch over laws that are being passed, how that law could affect our rights and if it does affect our rights it’s the Ombudsman’s role to do something about it,” she said.

She said her priorities are primarily to challenge the constitutionality of some of the laws that have been passed in the previous and current National Assembly, meanwhile giving visibility and creating awareness to the public about what her office does and how it works through workshops with the civil society and journalists’ association.

“I want citizens to be aware that it is their office and it should be the first place they should call if they feel that something is affecting their constitutional rights,” she said.

She also saluted the work done by her predecessor Dora Zatte, who has been in the post for seven years, and hopes to build and improve on what she had started.

The Ombudsman office has been in existence for 24 years and it is located at Aarti Chambers.