Archive - Letter to the editor 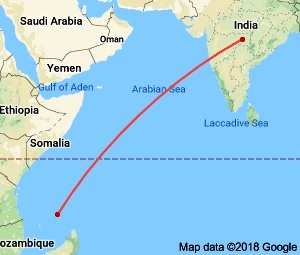 There are eight sovereign states that have successfully detonated nuclear weapons. Five are considered to be nuclear-weapon States (NWS) under the terms of the Treaty on the Non-Proliferation of Nuclear Weapons (NPT). In order of acquisition of nuclear weapons these are: the United States, Russia (the successor state to the Soviet Union), the United Kingdom, France, and China. Since the NPT entered into force in 1970, three states that were not parties to the Treaty have conducted nuclear tests, namely India, Pakistan, and North Korea. North Korea had been a party to the NPT but withdrew in 2003 but we believe they are developing nuclear ballistic missiles. Israel is also generally understood to have nuclear weapons, but they keep it a state secret. Israel is estimated to possess between up to 400 nuclear warheads. China became a nuclear nation on October 16, 1964 and India May 18, 1974.

Politicians are playing dangerous games with our survival and we at Seychelles Civil Society (SCS) say the time has arrived for us to stop them and take stock of what they are doing. These beautiful islands called the Seychelles could soon be a pile of nuclear fallout dust that will fill our atmosphere for generations to come thus devastating our islands if we the Creole First Nation of Seychelles allow other nations to meddle with our environment that we have worked so hard to preserve and not only us but tourists love to come to the Seychelles where they can breathe fresh air and go down the white sandy beach for a day and enjoy our beautiful islands. You cannot say the same for Mumbai or Beijing.

The politicians of Seychelles and India are playing with fire because once we allow a nuclear nation to use our territory, we automatically become a nuclear target. There are 7 Fundamental Rights that no one is allowed to violate and one of them is The Right against Exploitation. No nation no government and no individual is allowed to violate this fundamental right. If the Michel government signed any mala fide documents that violated one of our Fundamental Rights then it is incumbent upon President Faure to rescind this agreement especially if this agreement in any shape or form compromises our sovereign territory. Our Constitution permits our government to sign “Treaties” and “Treaties” are normally trading agreements between two nations which benefit both parties. A military base on Assumption Island under the current agreement promulgated and disseminated by our Attorney General recently is more than a “Treaty” because it surrenders our sovereign territory to the Indian Government and this is not acceptable. This is an erant autem pactum (one sided agreement) which benefits India more.

The dangerous games politicians are playing

Let us take a realistic citizen’s view of the dangerous games politicians are playing. The poverty rate in India is 23% of a population of 1.2 billion people which amounts to 276 million people in India live below the poverty line in shanty towns. China has a poverty rate of 6.5% of a population of 1.3 billion people which amounts to 8.5 million people living below the poverty line. Who in his/her right mind can believe that China will invade India and find ways to feed another 1.2 billion people? What would China gain by invading India? What has India got that China would like to lay its hands on? The truth is India is a nation that can barely feed its own people and it is offering Seychelles US $500 million to build a military base 4,892 Km, that’s 3,039.7 miles from India to Assumption Island which is also on someone else’s territory. It makes no sense whatsoever and tell me who else wants to invade India? Does Russia want to invade India when Russia has its own survival problems at home? Does Britain want India back? I doubt it. Of course the military people can see some value in this project because it keeps them employed just like we paid the Irish leprechauns millions of dollars to provide us with Intelligence about Seychelles being invaded and this was used during one of our Carnivals to scare the hell out of us and the invited guests. What sense does all this make when some people can barely put food on the table in both Seychelles and India. Seychelles has a poverty rate of 40% out of population of 93,000 which means 372,000 Seychellois live below the poverty line and sometimes the mother goes to bed without super and saves it for the kids to take to school the next day. Can you believe this is taking place in our country? Yet we are told we are a high income country, what a load of rubbish these politicians want us to believe? Notwithstanding, we elect these crazy politicians and they use the people’s money to scare the living daylight out of us and put some in their pocket to boot.

I watched the Indian High Commissioner getting angry with the people of Seychelles on TV and I asked myself who is this guy? Does he not know that not a week goes by that we do not roll out the red carpet at State House to receive one Ambassador or another from various countries and that they all tell us in their SBC interviews how Seychelles will benefit as partners with their respective country but very little happens with the majority of them although we do have a handful of friendly countries working very well with us. Ambassadors come and Ambassadors go but our sovereignty is our legacy to our next generation and it is not negotiable for a few millions of dollars, Mr Ambassador. Then there is a little donation here and there and sometimes we get our kids to sing “thank you” for the donations? Come on time has moved on and we should no longer be required to put our children in such predicaments. People say Seychellois are proud people well let us stop condescending ourselves in front of foreigners who come here for their personal gains or their country’s benefits. We have the people and we have the brains to make our own way in the world if only Seychellois could learn to work together as a team and stop denigrating each other. This is our weakness and when we are weak foreigners take advantage of us, of course.

The air we breathe in Seychelles is purer than in most countries apart from the repugnant smells at Providence which lingers on and on and our government do not appear to be able to stop that repulsive smell. According to a CNN report there are over 1 million deaths in India which can be attributed to poor air quality and according to the World Bank and SEPA in the region of 760,000 people die prematurely due to poor air quality in China each year. Would it not be better for the politicians of India and China to spend money on saving citizens’ lives rather than build military bases far away from home for what purpose? Would that not make more sense? Most politicians forget the world has changed and their mind-set must change or they move out and make way for new ideas, new partnership and above all new thinking and a new way of treating each other with respect. Most of the world’s neo dictators have either been removed or they have been forced to step down, the latest being Jacob Zuma in South Africa, and Mugabe before him in Zimbabwe, who did not want to go and we know why?

No nation on Earth wants to invade India or China and just because both these nations are developing fast, all of a sudden their politicians think they are valuable and they must spend millions on defence which is a bit like Seychelles keeping a huge army to defend what? Our devaluing Rupee? Vallee de Mai? Come on guys let’s cut out the b***** and get real. Every nation in the world is struggling to feed its own people. America, through President Obama, sent millions of dollars in aid to Africa, for the people of Africa but most of the money found its way into politicians’ Swiss Bank accounts and the people of Africa never saw one dollar and they are still dying of hunger. Now Trump is cutting out aid to Africa and everyone is saying this is going to hurt the people of Africa.  Wrong, it is going to hurt the greedy politicians of Africa not the people because the people never received any money.

Violation of our Fundamental Rights

There are 7 Fundamental Rights which no citizen, no politician or animal or plant can change and these are enshrined in the 1948 Universal Declaration of Human Rights which brought human rights into the realm of international law.  One of these Fundamental Rights is the Right against Exploitation which most politicians forget from time to time in their attempt to get re-elected or stay in power. In addition all the islands of Seychelles belong to the Seychellois people, which gives us the First Nation Rights and although our past Presidents have given one or two islands away during moments of passion or have sold a couple here and there to get some forex in the bank during the ‘Napa’ years now the time has come for the people of Seychelles to reclaim these islands because our past Presidents committed what is termed a “faute” in law and their mala fide acts must be reversed and no more surrendering our sovereignty to foreigners. One good example is on August 3, 2012 D’Arros Island was resold by Liliane Bettencourt, 89 and France’s richest woman, the heir to the L’Oréal fortune for EU 49 million to a Saudi philanthropist. Liliane Bettencourt bought the 2km-long island of D'Arros for only EU 15 million in 1998 from the Seychelles Government, thus making a clear profit of 34 million Euros. Our past Presidents have allowed foreigners to profit on the backs of Seychellois and now the people are saying enough is enough we want our money and our islands back. The people of Seychelles request that the Indian Government removes all its equipment from Assumption Island and Mahé and return Assumption back to the state they found it.

The views expressed in this article are those of the writer and do not necessarily reflect the views of the Seychelles NATION newspaper.