Tyler Fred from Plaisance secondary school, Adam Moncherry and Nicole Grasselli Barni from International School Seychelles (ISS) and Alina Muslun from Independent School were the main heroes of the Sacos-sponsored National Inter-School Swimming Championships dominated by Independent School with six of the 10 cups.

The finals of the yearly competition took place on Friday at the Roche Caïman pools. 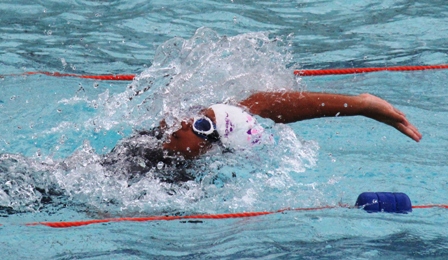 “It was quite tiring and tough and I was not expecting to break the record but I am happy to have achieved it,” Muslun told Sports NATION.

“I was expecting to break at least a record as I have been training very hard lately,” Fred told Sports NATION.

Another athlete who wrote his name in the record books is Adam Moncherry and he did it twice. Moncherry made the male 16 years and over category 50m butterfly record his by stopping the clock at 26.69 seconds to erase from the record books Kenny Roberts’ old record of 26.84 seconds set in 1994.

Speaking to Sports NATION, Moncherry said: “It feels really good to have broken two records considering I didn’t really prepare for this competition. So, it puts me in the right frame of mind for the forthcoming Commonwealth Games and hopefully there will be more national records”.

In the girls’ 16 years and over 50m freestyle, Nicole Grasselli Barni clocked 30.19 seconds to get a new record, thus erasing the 30.66 seconds mark belonging to Anisha Payet since 2016.

The last record to fall was in the male 16 years and over category  4x50m freestyle relay with the International School quartet lowering the old record of 1 minute 51.42 seconds (1:51.42) belonging to the Seychelles Polytechnic since 2014, to 1:51.19 for a new record.