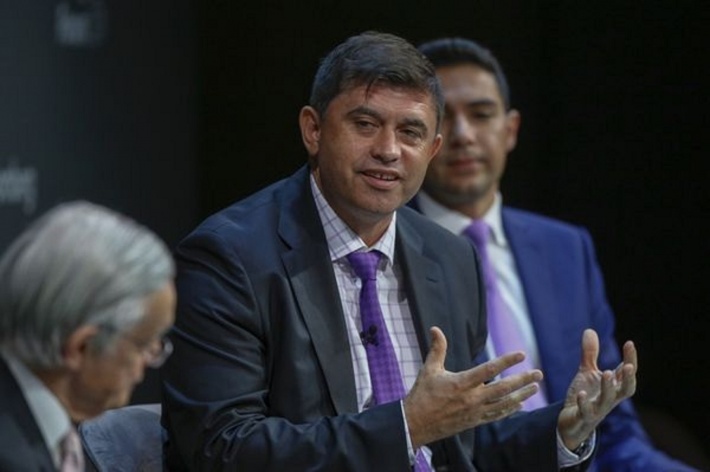 The operator of the stock exchange in Seychelles is about to win a race that stretches from the white sands of the tropical archipelago to the spotless streets of Zurich: the launch of the world’s first regulated security token on a national stock market.

In the next few days MERJ Exchange Ltd., operator of the bourse, will list tokenized securities in its own stock, chief executive Edmond Tuohy said in an interview last week. By doing so it will beat competitors including the Swiss exchange company SIX and the Gibraltar Stock Exchange, which are close to introducing the securities.

Tokenized stocks are digital assets representing shares in a company. The use of blockchain technology, a decentralised ledger that underpins cryptocurrencies like Bitcoin and Ethereum, allows the easy transfer of these assets between buyers and sellers, potentially reducing costs. Because they are classified as securities, regulatory hurdles have so far prevented bourses from launching such products.

“There are a lot of people in the market who want this but there is a big gap at the moment: there is no, at least on the exchange side, well-regulated institution that does listing, trading, clearing, settlement and registry that’s using distributed ledger technology,” said Tuohy, whose company has run the exchange on the Indian Ocean island since 2013.

“We are taking the advantage in being a first mover.”

The planned listing puts MERJ’s timetable ahead of SIX, which on July 6 announced the launch of the SIX Digital Exchange, described as “the first market infrastructure in the world to offer a fully integrated end-to-end trading, settlement and custody service for digital assets”.

“We want to be fast but we want a full end-to-end product,” said Julian Chan, SIX’s deputy head of media relations.

“Its a challenge on the regulatory side and the challenge is maybe bigger than the technical challenge. There are some unknown factors that have to be solved.”

GSX Group, which runs the Gibraltar Stock Exchange, has permission from its regulator to list tokenized shares and hopes to get the go-ahead for trading soon. By the first quarter of 2020 it plans to be using its own blockchain technology, STACS, to trade shares, debt and funds,” said chief executive Nick Cowan.

“We will have the full stack of services,” Cowan said in an interview. “We want to be one of the early movers in applying distributed ledger technology. The same challenge for all of us is making sure that the securities don’t end up in the wrong hands.”

Seychelles took a decision before the establishment of the exchange, which now has more than 30 standard listings with a combined market value of more than $300 million, to enact comprehensive legislation to regulate the securities industry. Another five standard listings are expected to follow soon with three already approved.

“There are licensed exchanges but they are not licensed to do the post trade needed for digital assets,” said Jim Needham, head of digital asset strategy for MERJ. “We’ve got a real advantage in that we can do the whole thing end-to-end in a regulated wrap-up.”

Seychelles has in the past been flagged for the lack of transparency of its financial sector with the OECD in 2013 categorising it as non-compliant in terms of tax transparency. Since then the government has implemented a range of regulations to strengthen the sector.

MERJ plans to use Ethereum, with Tuohy saying the technology behind the cryptocurrency is better suited to tokenized securities than Bitcoin. The initial listing will be followed by a second tokenized offering within days and there could be as many as 30 on the exchange by year-end, including real estate companies, he said.

Still, the appetite for the tokenized securities is untested.

“It seems like a big bridge to cross and will there be anyone there?” he said. “If you build it, he will come,” he said in a reference to Field of Dreams, a 1989 film about faith.