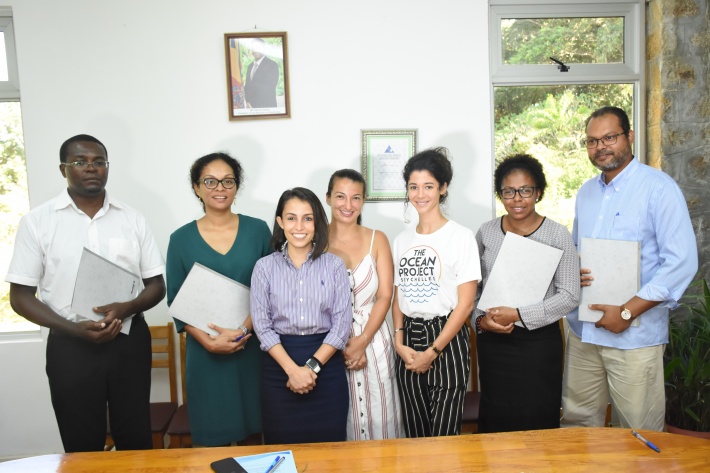 The Ocean Project Seychelles (TOP), a not-for-profit and non-governmental organisation, is undertaking a three-year marine litter monitoring programme by investigating the abundance, distribution, composition and the potential sources of marine debris on beaches.

The aim of the exercise is to establish a data base for efficacy of long term management and assessment of mitigation measures thus promoting solutions to reduce the threat.

The programme, which has been sponsored by the Western Indian Ocean Marine Association (WIOMSA), will include clean-ups and monitoring on three beaches on Mahé – Beau Vallon, Anse Royale and Grand Police – and one site on the outer island of Farqhuar, four times a year (peak south east and north west monsoon and inter monsoon) for thirty-six months. TOP has registered 35 volunteers for the programme.

For effective running of the surveys and accurate data collecting, the agreement sees the MEECC providing volunteers from the Biology, Conservation and Management division to help with the survey while the LWMA which manages the contractors who clean the Beau Vallon and Anse Royale beaches on a daily basis, has agreed that contractors will not clean the designated stretch of beach identified during the survey period.

As for the outer island site located at the Farqhuar atoll, IDC will be sponsoring flights, accommodations and meals for two volunteers during the survey period whereas the ICS rangers on Farqhuar will be providing their support as well.

To conduct the surveys, a 600 metre length of beach has already been identified at the sites and will be cleaned on the first day followed by ten days of monitoring as to how debris get on the beach. The first survey of the programme will start in October followed by surveys in January, May and August 2020. The schedules for the following two years are yet to be finalised

At Beau Vallon the transect will start in the vicinity of Boabab Pizzeria and end opposite the beach at the ex-Vacoa village whereas at Anse Royale it will start at the granite outcrop (before getting to Fairy Land) and end near the chapel. At Grand Police the whole beach will be monitored.

For the remote atoll as explained by TOP’s other co-founder, Karine Rassool, the monitoring will be to find out in which direction the debris come to end up on the beach as earlier clean-up carried out in March showed that most of the debris washing up on the beaches do not originate from Seychelles.

Ms Rassool said that all data collected will be shared locally for consideration in waste management policies and also internationally for shared comparison.

She noted that on Saturday August 10, TOP will be having its big clean-up on the three sites on Mahé and all are invited to join.

The WIOMSA programme is being implemented in six other countries in the Western Indian Ocean Region, namely Mauritius, Madagascar, Mozambique, South Africa, Tanzania and Kenya.

TOP was established in November 2016 to tackle issues affecting the state of our oceans and these include marine litter, particularly plastic pollution, unsustainable fishing and climate change. These are tackled through field actions and awareness through education and research.

In 2018 TOP hosted 36 clean-ups on 7 islands, and engaged with 1100 participants, collecting 5 tonnes of marine litter consisting predominantly of single-use plastics. This year TOP has continued with its monthly clean-ups and in partnership with IDC it participated in the first large scale clean-up of 8 outer islands where the 40 volunteers collected 10 tonnes of marine debris among them.