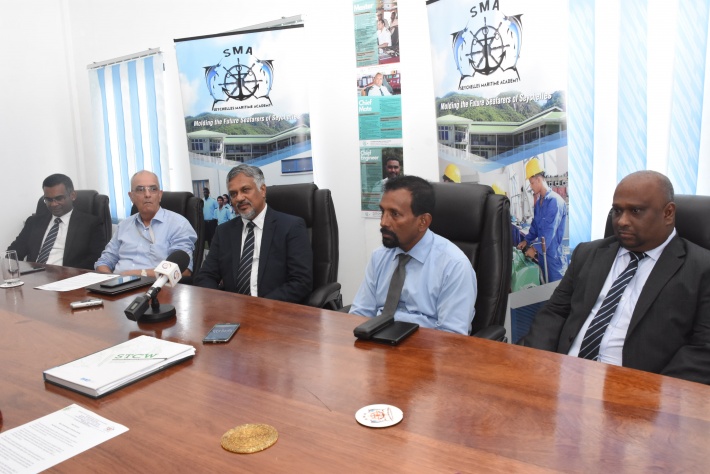 Seychelles has started to issue certificate of competency (CoC) to Seychellois seafarers, now that the Seychelles Maritime Academy (SMA) is providing a new field of internationally recognised certified maritime studies for the purpose.

The Seychelles Maritime and Safety Administration (SMSA) is the legitimate authority to issue such certificate.

The announcement of the major breakthrough in maritime studies in Seychelles was made by Captain Ajith Peiris, chairman of the board of the Colombo International Nautical and Engineering College (Cinec), Sri Lanka, during a press conference at the SMA premises, Providence, on Tuesday.

Also present at the conference on Tuesday were the director of SMA, Captain Taraka Telwatta and the chairman of SMA, Conrad Benoiton.

According to Mr Benoiton, local seafarers will undergo 70% of the training here with theory courses at SMA and sea time accumulation on Seypec tankers and this process will take three years. The remaining 30% of the course consisting of automation training which SMA is not equipped to carry for the moment, will be held at the Cinec for the duration of the last four months.

Candidates must have proven to an examination regime of the administration where they appear for the relevant assessments in three categories: (1) Deck Officers-Master, Chief Mate, Navigational Watch Keeping Officer;(2) Engineer Officer-Chief Engineer, Second Engineer, Engineering Watch Keeping Officer and (3) Electro Technical Officer. SMSA is now the legitimate authority to issue its own CoC to successful candidates who have completed their studies at Cinec and SMA.

The Certificate of Competency is a form of a license given to navigation officers and engineer officers to work on ships. The certificate complies with the international conventions on Standards of Training, Certification and Watch keeping (STCW) to whom Seychelles is a ratifying state and is recognised by the International Maritime Organisation (IMO) as a white listed country. The certificate ensures that the concerned person has the sufficient knowledge and skills to sail on ocean going vessels.

Captain Peiris said that he was very happy that Seychelles is now on par level with its international partners where CoC is concerned.

He noted that the historical accomplishment is among missions accomplished for SMA since Cinec signed the memorandum of understanding (MoU) six years ago with Seychelles through the Ministry of Education and Human Resource Development (MEHRD), to bring Seychelles maritime education to international standards.

Previously as Seychelles did not qualify to perform the entire process without being accepted into the White List, local seafarers at different career levels pursued their studies in the UK, Ireland, Australia, and Singapore, and likewise in Sri Lanka, for the internationally recognised examinations and certifications.

With the training and CoC being given in Seychelles, Mr Benoiton said that budgetwise it will allow for more local seafarers a chance to acquire such certificate as there will be no need to send people overseas for the required training.

The procedures for certification which has facilitated the process of a coordinated programme in achieving the standards of curriculum needed for certification, initiated between Cinec and SMA, followed the signing of a MoU signing in Sri Lanka in February 2019 between SMSA and Cinec.