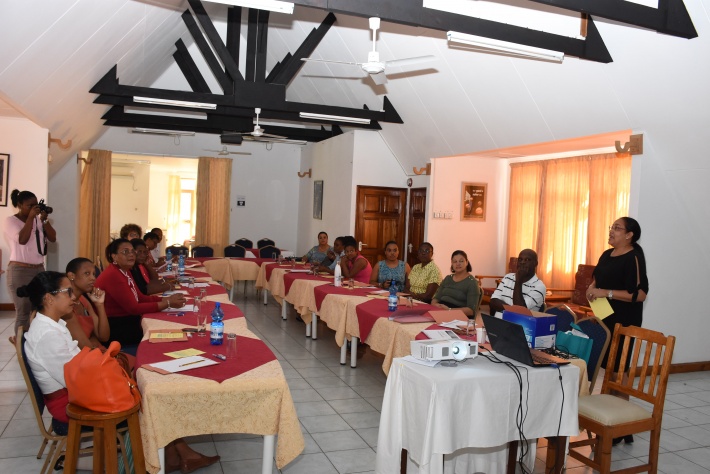 The data collectors during the training session yesterday

The Institute of Early Childhood Development (IECD) will, from August 19 - 30, 2019, hold its 3rd national advocacy survey on Early Childhood Care and Education (ECCE) in Seychelles.

The survey, which is done every two years, seeks to gather information on what respondents know about a general or a specific issue concerning early childhood development and that is what they think about that issue and how that influences their actions, identifying knowledge gaps, beliefs or common practices that may be protective or pose a risk to children’s well-being. This is to ascertain whether the level of the respondent’s knowledge and understanding of ECCE issues has been sustained as a result of enhanced advocacy strategies and campaigns.

The survey will be taking place in randomly selected homes in all districts on Mahé, Praslin and La Digue where a maximum of three persons in the household between the ages of 17-65 years old as eligible respondents, will be interviewed. The questionnaire for the survey is based on health and safety, education, parental and community links, child and social protection and policy.

Similar methodological approach will be used for this survey, including the administration of the same instrument and application of analytical techniques as the two previous surveys conducted in 2015 and 2017.

Apart from the wider community, ECCE professionals, partners working in close collaboration with ECCE services and policy makers will also respond to the questionnaires.

For the smooth running of the survey, a special training workshop was held at Care House, yesterday afternoon for the data collectors who will be administering the questionnaires. The training was run by consultant Egbert Benstrong.

The training for the 14 data collectors started with an introductory remark by the chief executive of IECD, Shirley Choppy, followed by an overview of the advocacy survey and results for 2017, presentation of and discussion on survey instruments, procedures and tips for the administration of instrument. It ended with a plenary session and information sharing.

Arising from the international and national drive to adopt an integrated and holistic approach to child development and promote early childhood care and education as the foundation for building have resulted in significant policy developments and changes in the early childhood sectors in Seychelles. The creation of IECD, as an autonomous entity, was a significant step towards a unified eco-system of early childhood development at home-based and centre-based childminding services in the country for children of ages 0-4 years.

One of the main programmes proposed by IECD the programme-based performance budgeting (PPBB) framework is concerned with advocacy, communication and information. This survey will seek to further put in place future regulations for intervention strategies, promote standards, research, monitoring among others to attain standards conducive to the holistic development of children.

According to Mr Benstrong, the two previous surveys have been successful because evidence has shown a change in the understanding of specific and general issues of ECCE and also due to the significant increase in knowledge level of respondents.