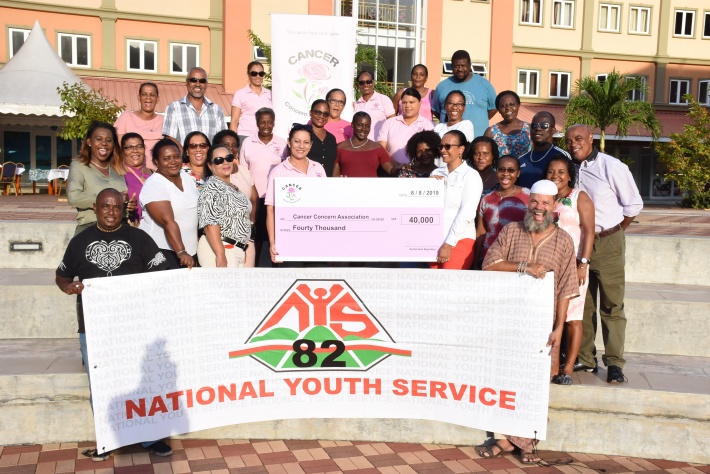 The handover of the cheque

The National Youth Service (NYS) class of 1982 donated R40,000 in support of the Cancer Concern Association (CCA) in a short ceremony on Thursday afternoon at the Harbour Café at Espace Building in Victoria.

“A few of our old class mates as well as people in our lives have passed away from cancer and we felt that we needed to reach out and do something as it can happen to any of us,” said Michel Desnousse, PR and Communications Officer for the NYS 1982 association.

Mr Desnousse added that they decided to partner with CCA because they felt that cancer awareness is very important and the key to surviving is early testing which a part of the donation will help to do.

“NYS gave us a lot of values and we want to share that with the community and share the value of volunteerism to the next generation to carry on with bringing positive changes in the community and in Seychelles,” added Mr Desnousse.

The money being donated was obtained through a sponsored walk that the NYS cohort organised and where they raised over R50,000.

“The donation shows that our efforts to reach out to the community is not in vain, and like our motto says ‘you never have to be alone’,” said Josie Michaud-Payet, the vice-president of CCA.

She added that the association welcomes such gesture and the funds donated will go towards the cancer centre that will provide services to people undergoing cancer treatment.