In their Champions League match at the Moroni Stadium in the Comorian capital, Côte d’Or took the lead in the first half through Colin Esther, before Peter Adesinas doubled their lead in the second half.

On the way to a comfortable 2-0 away win, the Praslin-based side let down their guard late in the second half, allowing Fombini FC to score twice, levelling the match at 2-2 at the final whistle.

The return leg will be played on August 23 at 4pm at Stad Linite.

Against Seychelles’ representatives, TS Galaxy started their Caf Confederations Cup debut campaign on the winning note after earning a 1-0 in the first leg victory in their preliminary round tie on Sunday afternoon at the Mbombela United Stadium.

The South Africans were making their first-ever appearance in continental competitions after they defied the odds and beat Kaizer Chiefs in the Nedbank Cup Final last season.

Dan Malesela’s charges had an opportunity to find the opener in the 15th minute after they were awarded a penalty following a handball inside the box but they could not capitalise as they missed from the resultant spot kick.

The hosts were knocking the ball around with confidence and threatening to break the deadlock with quick passing and movement going forward, opening up spaces in the last third.

Galaxy finally found the breakthrough five minutes before the break through Sizwe Mdlinzo and managed to head to the dressing room holding a 1-0 advantage.

The Rockets were showing signs of tiredness after the hour-mark as the National First Division season has not started yet, lacking the intensity and rhythm.

The South African outfit were unable to add to their tally in the half, but they will be happy at the fact that they kept a clean sheet in their tournament debut.

St Louis will host TS Galaxy on Sunday August 25 at 4pm in the return leg. 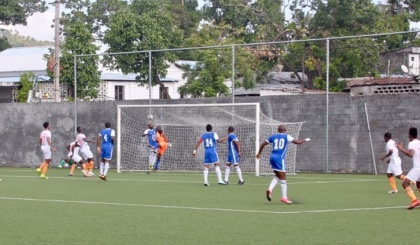