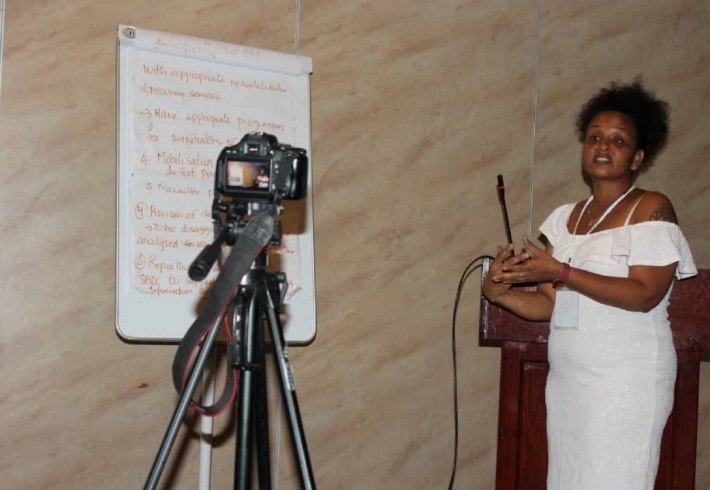 Winifred during one of her presentations

‘My most valuable treasure is my family’

Every woman has a different story to tell and today Winifred Rose opens her heart to our readers. She has been through thick and thin but stayed grounded in order to bring up her family of five children. The meaning of happiness for her is to have a united and happy family.

“Most people know me as Winifred Baccarie but I prefer to be called Winifred Rose, Rose being my legitimate maiden name. I went to school at La Rosière school. I joined the National Youth Service in 1993 and studied Arts and Social Science. I did not finish my one year because I chose my eldest son over abortion when I got pregnant. A decision that, despite all I left behind, I have never regretted even once. Getting pregnant and keeping my baby at 17 was not easy especially as I was doing very well at school and the single woman, my mother, who raised me had high hopes for me; but I chose life and God did the rest. I also had a lot of support from my family and my son’s father who later became my first husband and I believe as long as you have breath, you have a second chance at life.”

Life as a young mother

“I have been married twice. My first husband, the father of my children, passed away in 2002 as a result of cancer. I am divorced from my second marriage but I’m not single now. I am the proud mother of five children – four sons and one daughter – and although we have known our fair share of hard times as a family, the lessons we have learned and the way we are tight in our love are what complement us as a family.”

Winifred joined the police force in 2002 and after 17 years of service she resigned from the force.

“I served in different capacities and different locations, including the Office of the President where I was seconded as Liaison Officer for police issues in 2007, the secretariat of the Minister for Internal Affairs where I was the Senior Liaison Officer for Internal Affairs and in the police, I was the Public Relations Officer in the PR and Corporate Image Section until my resignation.

“Since I left the force, many people who know me have been asking me why I left. I have been learning so much more from the public about myself now that I am a civilian, than I ever did as a police officer. Apparently some people thought I was one of the best and for that I still wear my pride as my badge of honour for the services I rendered to my country and my people while I served in the force.

“My reason for leaving the force therefore is not because I no longer wish to serve but because, in fact, I wish to serve truly without prejudice and without any barrier that may stop me from going all the distance to feel the pulse and hear the heartbeat of my people.”

“While I am no longer a police officer, I still continue to serve through my other great passion which is human rights and voluntarism. I am a human rights defender, an activist and am presently involved in projects on a consultancy basis for LGBTIQ and gender justice and equality.”

Why activism and why human rights? “I believe the answer is on two levels: the obvious is the reason why I joined the force in the first place, because I wanted since I was a child to uphold and protect my fellow men’s rights but my passion to defend took roots and grew to fire as I myself grew into who I am today; my struggles and my victories, the paths I have travelled have crossed those of many other warriors and survivors. On my journey I have had to wear many different shoes and thus travelled many roads, seen many things, felt as much pain as I have felt joy. I have known as many sad moments as happy ones and I have learnt to find myself and my true calling through all that.

“In my life I have achieved many things personally; in 2005 when I finished my recruit training at the Seychelles Police Academy, I came out Second Best Overall in my cohort. In 2013 I was able to make the Highest Academic mark among officers of different ranks including those higher than I, in the Law Enforcement Leadership Development Training in Botswana and in 2018 I won the Second Runner Up Trainer of Trainers Award in the Aids and Rights Alliance Southern Africa, Human Rights Leadership Training in South Africa.”

Family remains the backbone of my life

“However, my greatest achievements still remain two very important components of my life; those are my children – they are not perfect but in this troubled world, I can say that they are thriving and they know how to put God first. And then there’s me: the values that I have cultivated along the paths of life that sustain me and smooth my way; gratefulness, humanity, love, service to others. The joy and peace I get in being myself and in serving others are what I continue to strive for.

“All the elements of my best relationships are at home, central is my family and we serve God. I have a few special people whom I call friends and am satisfied that wherever life takes us, those few know I have their backs as much as they have mine. I do not believe in betrayal and that is why I cherish a very small circle of proven people among whom my sister is my Best Friend since the day she was born.

“I believe I have a few enemies...and I know people who would give their last cent to see me fail and fall but I serve a Living God and no weapon formed against me or my family shall prosper.”

“If you should ask me what I do in my spare time, I would tell you I have no spare time but the time when I am sleeping. My days are spent between keeping my home and my family; and doing what I do in serving others. I do not socialise much but my favourite place for networking is social media. I have a facebook profile and my Twitter ID ‘Human Rights Defender with a Difference’. Some people tell me that I am ‘loud’ on social media and my answer is: ‘I can defend your rights better when I am able to ensure none of mine is being violated’.

“I do love reading though; my favourite author since I was 12 is Danielle Steel and Virginia Andrews. I also enjoy the plots of John Grisham; I remember how my late husband, the father of my kids, gave me my first John Grisham hardback in 2001 after he had just returned from treatment overseas. It was ‘The Street Lawyer’ and since then I’ve never missed a new publishing from the author.”

“I do not have great dreams but that simply my children remain always under God’s protection and that I remain faithful to the end. As the world gets more hostile, life gets more stressful and things seem to be falling apart faster than we have ever known, I wish that my people would return to the faith that upheld our forefathers to live in dignity and hope despite hard times. Let us pray more, for our families, our youth and our country. Some of the things that are happening now are destined to happen but we do not have to bear the weight of the world on our shoulders.

“Everything happening out there, all the rapes and the thefts and the abuses and all sorts of victimisation, the pain, the hurt, they are the results of human negativity, greed and stubbornness...we won’t get rid of the scourges but we can adjust ourselves to be positive amid the negativities.

Advice to the youth

“You do not need to fall low to prove your worth; just hold on to your values and take heed to sound advice. Life is not easy but the brightness of your future is yours to shine. To my people: We are created as one, let us find that little spark of unity that has always characterised us as a nation and together, let us ‘work it’ into a triumphant flame.” 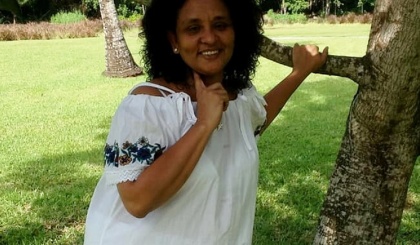 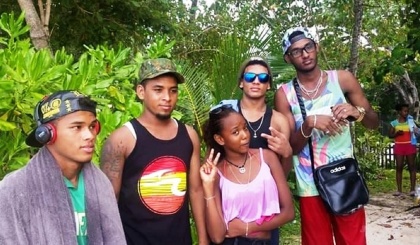