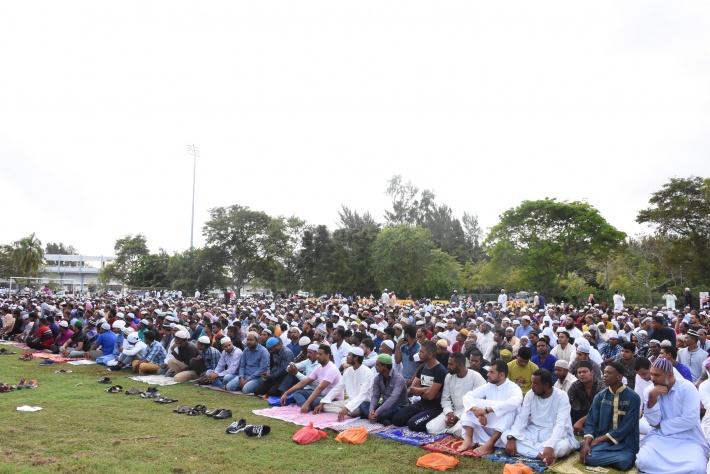 Muslim in Seychelles, men, women and children, including foreign workers currently employed in Seychelles, joined the rest of the Muslim world in prayers in celebrations of ‘Eid ul-Adha’ Adha (Festival of the Sacrifice) to mark the sacrifices of Prophet Ibrahim (Abraham) who was ready to sacrifice his son in obedience to God’s command.

A large congregation was at the playing field outside Stad Linite at Roche Caiman early on Sunday morning for the holy prayer which coincided with the annual pilgrimage Hajj which was happening at the same time in the holy city of Mecca in Saudi Arabia. The Eid-Mubarak prayers were led by Tanzanian Imam, Yahya Ibrahim.

Delivering the Eid Khutba (sermon), Imam Abdur-Rahman Camille from the Eid National Committee said that Muslims should always stay obedient to God and also to the rules of the motherland.

He said that Muslims should follow the example of Prophet Ibrahim who was obedient to God as he was ready to sacrifice his son – Ishmael – when he was ordered to do so.

Imam Camille noted that Muslims should seek ways to make sacrifices to God by refraining from disobedient and other bad habits that will hurt God and surely other peoples of God.

In his message for the sacrifice celebration, Imam Abdur-Rahman Camille told the congregation to instill in themselves the knowledge of peace.

He said that many Muslims who do not understand the Islam religion have helped tarnished the image of the religion through acts which Islam does not abide by. He noted that Islam does not teach atrocities, terrorism, radicalism or fanatics but teaches only peace and harmony.

Imam Camille said that Muslims in Seychelles should promote peace and unity in the country and in the communities.

He said the best way for Muslims to achieve in promoting peace, love and harmony in the country is for them to follow the story of the life of Prophet Ibrahim who went as far as to ask God for peace in his country.

“So do not follow the radical ideologies or methodologies from those Muslims who have misunderstood the meaning of Islam and let Seychelles have and enjoy the peace she deserves. We are living in a peaceful country and we want it to stay that way,” Imam Camille said.

Eid prayers also took place yesterday on Praslin, La Digue and other islands for members of the Muslim community.

To celebrate the traditional Eid ul-Adha (Festival of the Sacrifice), Muslims in Seychelles sacrifice mainly cows and goats for feasting with families and friends.

“Most people think that there is no feasting in Islam. Eid means feast. It’s about celebration. We do feast and enjoy ourselves with families and friends but with no alcohol,” said Saad Labonte.

It is to be noted that for the first time in the history of Seychelles, a delegation of 23 Muslims – 16 men and seven women – are in the holy city of Mecca at the invitation of King Salman bin Abdul Aziz of the Kingdom of Saudi Arabia, to perform the annual pilgrimage Hajj, one of the world’s largest religious gatherings with over two million people coming from every corner of the world. The ultimate goal of Hajj is for Muslims to seek forgiveness for their sins.

Most of the Muslims who talked to Seychelles NATION said that families should be taught the meaning of making sacrifices to God. 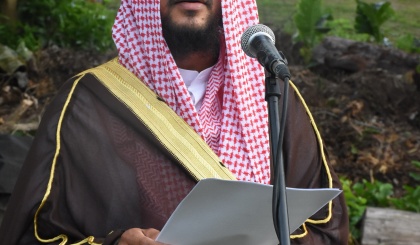