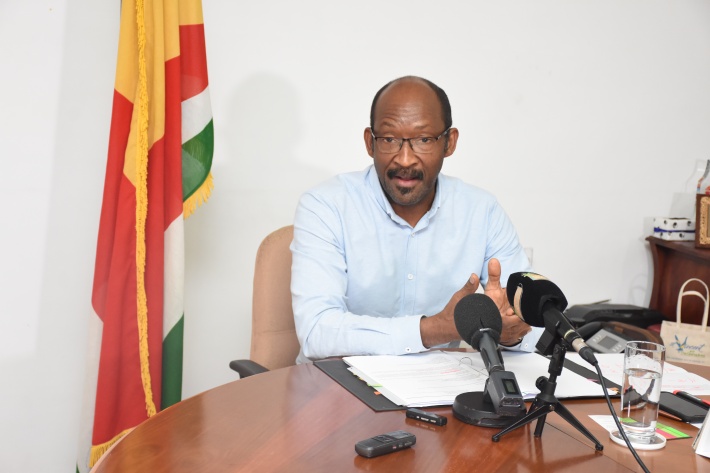 Vice-President Meriton addressed numerous questions starting off with the appointment of renowned singer Patrick Victor as an honorary cultural ambassador. Mr Victor was officially appointed last week by President Danny Faure following much debate in the National Assembly and the withdrawal of the motion by leader of government business in the National Assembly Charles de Comarmond, to appoint Mr Victor as an ambassador at large.

Vice-President Meriton noted that Mr Victor’s appointment will serve as a marketing tool to promote the Seychellois culture and which could potentially be used as a competitive advantage especially since the tourism industry is becoming increasingly competitive.

“As was mentioned in the assembly, Mr Victor is not an ambassador in the diplomatic sense but rather an ambassador by which we can market Seychelles overseas. I think Mr Victor is already fulfilling such roles. He is an island boy, a composer, a singer and also a writer, so what better individual than one who is well-known across the Indian Ocean through his songs such as Koste Pep Losean Endyen and he is already synonymous with Seychelles,” Vice-President Meriton said.

“The President wants to promote Seychelles through individuals who have been striving to put Seychelles on the map culturally. I think it is totally normal and apt that he is given this role. There have been other ambassadors which the President has made mention of before and we have already met the department of Foreign Affairs, department of Culture and Mr Victor to establish a framework to help him discharge his functions in the global cultural domain, so we can continue to stand out and to valorise our orange industry and our creative industry and add value with our tourism industry which is characterised by increasing competition as many countries offer white sands, turquoise seas and lush vegetation,” VP Meriton noted.

With regards to digital governance, Vice-President Meriton affirmed that work is ongoing by the DICT to render government services more accessible to members of the public and within government departments.

“Through modern technology, the processes are much quicker, you use fewer resources such as paper. Currently, with the Planning Authority, we have managed to have an end to end service whereby an individual can submit a planning application and this is considered by all concerned agencies digitally and they have the opportunity to add their response and feedback and the planning application is then approved electronically. Our objective is to speed up the process, use fewer resources and render services more interactive for the population,” Vice-President Meriton stated.

He added that the introduction of digital governance is in line with the Access to Information Act 2018 which makes provision for pro-active disclosure for the government to communicate all information required by the law. While he acknowledged that a lot of work still needs to be done, Vice-President Meriton stated that the Access to Information committee has already completed the majority of the basic work and that they are ahead of schedule in implementing the law geared towards providing citizens with more information, which is essential to democracy.

“We are working with the World Bank on the Open Government Project (OGP), a barometer in transparency and democracy and the World Bank is satisfied with the progress made by Seychelles. We have already put in place our law, the chief executive and commission, they have already been trained and more training needs to be done on how to implement the law since all information in the public domain including minutes, procedures to be published under pro-active disclosure and the simplest way is to publish this information on a website,” he added.

In response to questions about the Blue Economy, Vice-President Meriton once again explained the Blue Finance mechanisms available to local entrepreneurs and business organisations.

He proceeded to pronounce Seychelles’ position regarding the recent release of 19 inmates (last week) who were charged with piracy in Seychelles but who were repatriated to Somaliland to complete their prison sentences.

“There are a lot of illegal activities that take place on our islands and in our maritime zones such as human trafficking, drug smuggling and illegal fishing and we need to curb, reduce and eliminate negative activities. As Seychelles is the country more affected by piracy, we have expressed our discontent with the government of Somaliland who has, without consulting us, decided to release 19 prisoners jailed for piracy who were caught and imprisoned in Seychelles. After the agreement was signed in London in 2012 when there was a conference on Somali but they decided to release them but we did not stop there. We contacted Mauritius who chairs the group called Contact Group on Piracy off the Coast of Somalia (CGPCS) and together with Mauritius we made a request to the United Nations (UN) to review the agreement,” Vice-President Meriton stated.

Speaking of his recent visit to the Comores for a meeting regrouping members of the Indian Ocean Commission, Vice-President Meriton noted several topics of discussion including the need to improve air connectivity in the region.

“On the recent trip to the Comores, we had to fly for hours despite the Comores being located just 2.5 hours away so there is a need to improve connectivity in the region. This will not only apply to airlines but also maritime to facilitate commerce and trade between the island states. For example, when buying litchis and fruits from Mauritius, it has to go through Dubai before Seychelles adding to the cost, so we need to consider the agricultural controls to ensure we have the standards and that they work. Regionally we need to have discussions and decide the way forward,” Vice-President Meriton added.