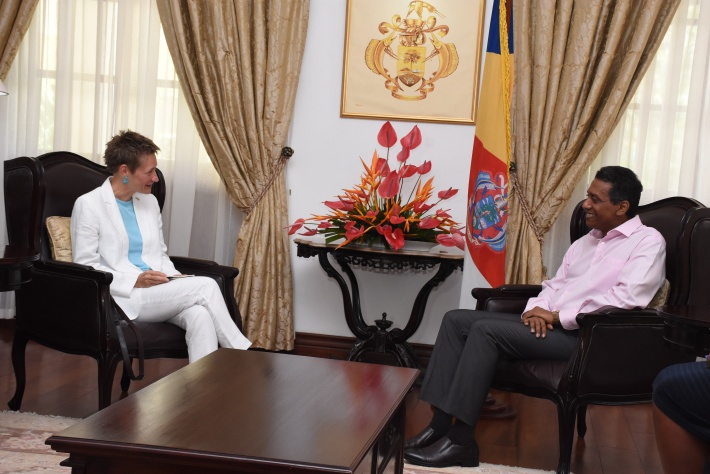 Outgoing British High Commissioner Caron Röhsler paid a farewell visit to President Danny Faure at State House yesterday morning in a brief meeting in which they exchanged pleasantries and discussed issues of interest to Seychelles and the United Kingdom.

During her visit, HC Röhsler and President Faure discussed the three key areas of cooperation, President Faure’s visit to London in 2017 for the Commonwealth Heads of Government meeting and the way forward as her successor Patrick Lynch, who has been appointed the new British High Commissioner to the Republic of Seychelles, takes up his appointment later this month.

“It is quite remarkable to look back on the amount of things we have been doing but I would say they were in three key areas, support to the president’s agenda of transparency, accountability and good governance, so the development of democratic institutions, particularly with the support of the Commonwealth. And the other two areas of our focus have been on regional maritime security and the Blue economy which have been two sides of the same coin and I said to the president that I had always felt we were able to work with the grain of initiatives and ideas that were being championed here and that’s always a good thing for a diplomat to be able to do,” HC Röhsler stated.

As she stated in her address at the farewell reception hosted on Monday evening, HC Röhsler urged Seychelles to keep looking to the future and to work towards achieving goals in Blue economy and maritime security.

“There’s always more to be done as I said in my farewell speech last night; I quoted Marie Curie who said that ‘one always sees what remains to be done’. It is important to remember how much has been achieved but to look to the future. There are foundations to build on in the Blue economy. I think the Blue economy needs to be something that is understood in Seychelles by the people of Seychelles so that they can really participate in the Blue economy and benefit economically, but also make sure they treat their own country in a sustainable way. That’s an important area,” added HC Röhsler.

“There are lots more work to do on maritime security and we have further announcements that I’m sure my successor will be able to make in the near future about UK strengthening support in that area,” HC Röhsler stated.

HC Röhsler further added that all countries with a democracy have to work towards maintaining and building democracy.

“And of course in deepening of democracy, while all countries with a democracy have work to do to maintain and build democracy so I think the areas of cooperation will continue with climate change work added. And my successor Patrick Lynch is arriving very soon and I know he is enthusiastic to get started and keen to carry on the work that we have been doing, with, of course a team here that will stay beyond me,” HC Röhsler said.

Asked about her experience over the past four years, she stated that the entire experience living in Seychelles has been wonderful and that she will continue to work in Seychelles even as she takes up her next post in the Republic of the Maldives.