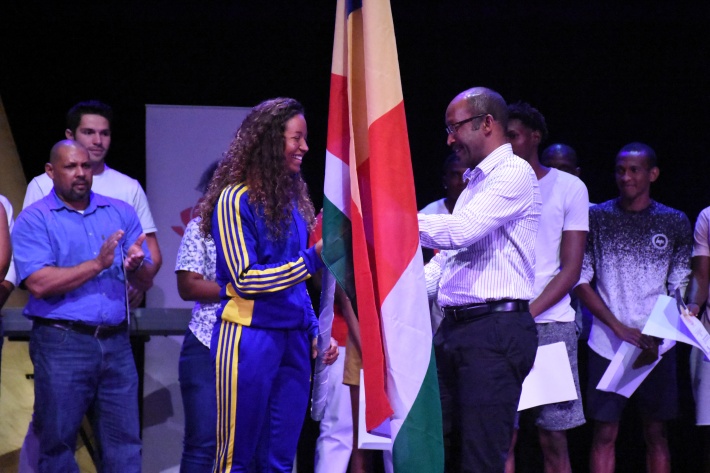 The new cash prize for a gold medal won by any Seychelles athlete at the upcoming 12th African Games scheduled for Rabat, Morocco from August 19-31 is R60,000.

The sum represents an increase of R10,000 on top of the R50,000 which was the reward for the 11th Games four years ago in Congo Brazzaville.

Designated Minister Macsuzy Mondon made the announcement on Wednesday during the Games’ sending off ceremony which took place at the International Conference Centre of Seychelles (ICCS) in the presence of Vice-President Vincent Meriton.

The ceremony was also attended by cabinet ministers, president of the Seychelles Olympic and Commonwealth Games Association (Socga) Antonio Gopal, who is also the president of the Conseil International des Jeux (Cij) which runs the Indian Ocean Islands Games (IOIG), and other government officials.

The total sum invested for the 12th Games is around R4.5 million.

It was Vice-President Meriton who officially handed over the country’s flag to swimmer Felicity Passon who will be Seychelles’ flag bearer at the Games’ opening ceremony.

Seychelles will be taking part in seven sports events in Rabat and the local athletes selected to make the team are: