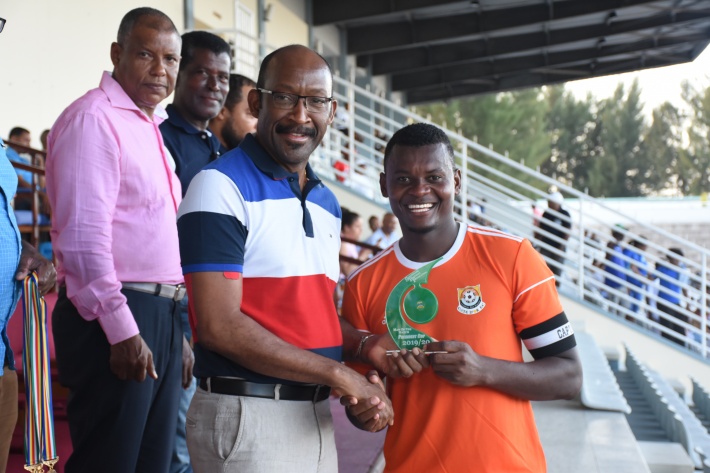 This early kick-off match had drawn a decent crowd in bright sunshine watched by Vice-President Vincent Meriton and other members of the Seychelles Football Federation executive committee as our football season changes from a March start to now follow the same format as in Europe and on the African continent to an overlapping 2019-2020 season.

St Louis made the brightest start despite missing four regular players namely Collin Bibi, Gervais Waye-Hive, Roddy Melanie through injury and Elijah Tamboo who was declared unwell before this match.

St Louis pressed their opponent and should have opened the scoring as early as the 3rd minute from Malagasy Tahiry’s free kick which fell to countryman Georges Kalo who set up captain Bertrand Esther in the penalty area but he blazed his shot wide.

In the 11th minute, Jude Nancy surged forward and sent a teasing cross across the Côte D’Or goalmouth to the inrushing Gerick Vidot but he could not direct a clear chance on target.

Côte D’Or, who struggled to get into the match, almost caught St Louis napping in the 23rd minute from a quick free kick by Malagasy Kassah to Collin Esther who darted through the St Louis defence and his low shot was just kept out by young goalie Gino Pleureuse for a corner.

St Louis did not clear their lines well from the resulting corner which was played wide by Collin Esther and Nigerian Peter Adeshina swung the ball at the far post where the lanky Oliver Bonte sneaked in to direct his header on target for a 1-0 lead for the Praslin outfit.

The first half, which was played at a high intensity made it that referee Bernard Camille gave the two sets of players a water break just past the half hour mark and when play resumed, St Louis kept pushing for an equaliser and went mighty close on the stroke of half time from a brilliantly weighted pass by Jude Nancy into the path of Karl Hall who had drifted into the opposing penalty area but Hall just dragged his shot narrowly wide of the far post to leave the score at 1-0 at the interval.

Early in the second half, Côte D’Or brought on national team striker Perry Monnaie, who had just returned to the country from an unsuccessful trial with South African club Free State Stars but still St Louis enjoyed the better of this encounter as Côte D’Or strengthened their midfield and defence to try and keep their opponent at bay.

In the 79th minute, St Louis won a foul in the penalty area after captain Benoit Marie had fouled Hall but Kalo drove the set piece straight in the Côte D’Or wall and two minutes later, young Dean Mothe, who had a superb game for St Louis, drove at the Côte D’Or defence and laid the ball off to Kalo but he was tackled in the nick of time by captain Marie to concede a corner.

St Louis’ last chance to score came in the 84th minute from Vidot’s floated corner which dropped to Kalo but the Malagasy striker headed wide as Côte D’Or saw this game out to win for the first time the President’s Cup. Their manager, Andre Bedier, was just relieved at the final whistle as he admitted his team had not performed to expectation despite the victory.

“We did not perform to our expected level and allowed our opponent to dominate this match but we just managed to score the all important goal to help us win this cup,” the Côte D’Or manager said.

As for the St Louis coach, Michel Renaud, he felt his team did not get their due reward from a match that they had been the better team.

“We created more chances to score which unfortunately we failed to convert and our opponent scored from a half chance but the number of injuries in our squad also impacted on our performance,” the St Louis coach told Sports NATION.

The Côte D’Or captain, Benoit Marie, was voted the man of the match for this season opening match and he said his team was determined to win this trophy which had always eluded them.

“We tried our best to win this trophy which we have never won and today the players were determined to win and we are happy with the result and I’m also pleased to win this individual award,” the Côte D’Or skipper said.

The cups and medals were presented to the two teams by Vice-President Meriton along with SFF Vice-President Dolor Ernesta and chief executive Georges Bibi. Cups for the Transitional league were also distributed to the first division champions Northern Dynamo and Inner Island league winners La Passe. 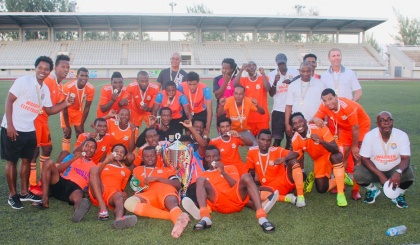