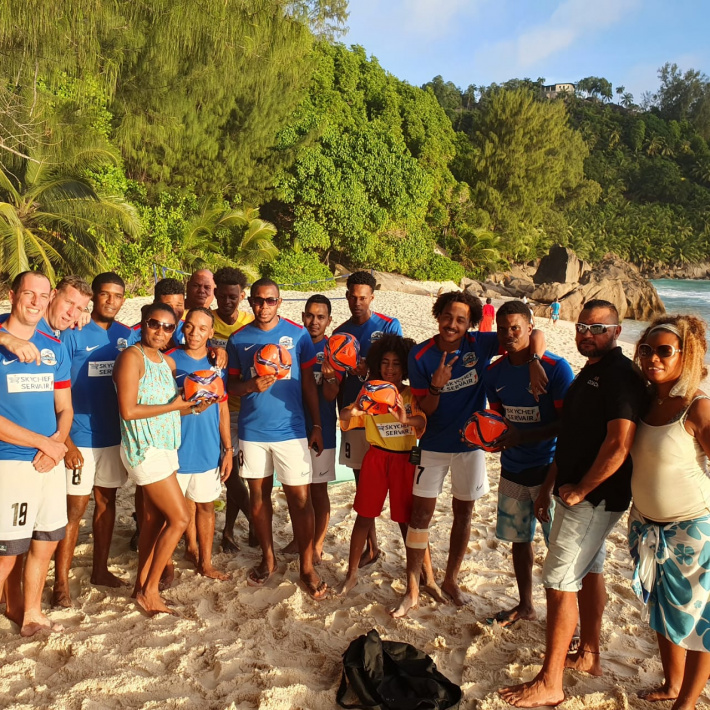 Ms Botchoix (fourth from left) flanked by players during the presentation

For the 2019-2020 football season, Takamaka-based beach soccer team Club Stormy Taka will carry the logo of catering company Skychef Servair at every match, following a sponsorship agreement and partnership between the two.

Skychef Servair recently donated a set of uniform, along with some footballs to the Southern Mahé club as part of its Corporate Social Responsibility (CSR).

According to the company’s sales and marketing manager Sharon Botchoix, they were approached by the club for sponsorship and the management did not hesitate to help the cause.

Ms Botchoix added that from the first sponsorship, a partnership between the two was set up enabling Skychef Servair to become Club Stormy Taka’s main sponsor.

She further added that the company will play an active part within the club’s activity, including its presence and support at every match.

Club Stormy Taka will begin their league campaign on Friday where they will face Real Maldive.

Established in 1971, Skychef Servair is the leading catering business in Seychelles, servicing major and award winning airlines, private flights, as well as the hospital and private clients.

The company employs over 275 people, with most of them having been with the business for many years.

The company produces over 3500 meals per day.