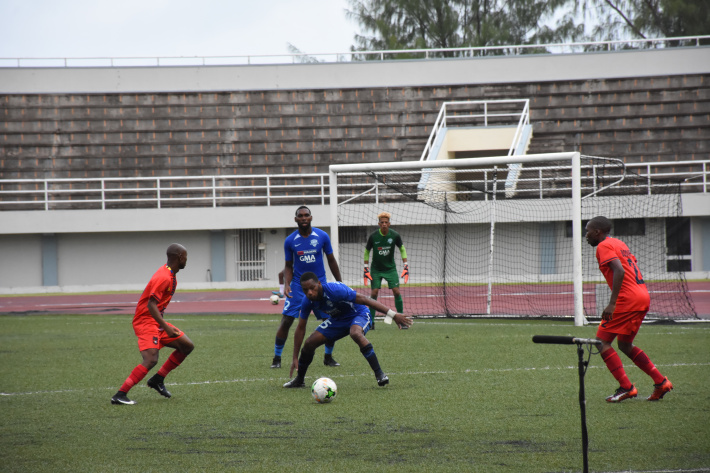 St Louis lose at home to bow out

St Louis had one thing in mind against TS Galaxy in yesterday’s return leg match of the Confederation of African Football (Caf) Confederation Cup at Stad Linite in front a big crowd. Win by a margin of at least two goals without conceding on home soil to overturn the tie and progress to the first round. But it did not happen.

Instead, visitors TS Galaxy of South Africa, who won 1-0 thanks to a Sizwe Mdlinzo goal in the first leg match at the Mbombela United Stadium, scored eight minutes into the second half through Thero Setsile to make it 1-0 on the day and 2-0 on aggregate in their debut campaign.

TS Galaxy will meet Malagasy team Caisse Nationale de Prevoyance Sociale Sport, otherwise known as (CnaPs) in the next stage of the tournament between mid-September and the end of that month.

TS Galaxy earned the right to play in the Caf Confederations Cup after becoming the first team from the South Africa National First Division (NFD) to win the Nedbank Cup. The team from KwaNdebele achieved this feat at the expense of Kaizer Chiefs, who went into the final at the Moses Mabhida Stadium as strong favourites to clinch a record-extending 14th title.

With St Louis bowing out, Côte d’Or will carry the country’s flag on the African continent when they meet Mamelodi Sundowns of South Africa in the first round of the Caf Champions League.

Ugandan Tony Kizito’s late strike earned Côte d’Or a 1-1 draw against Fomboni FC of the Comoros on Friday at Stad Linite for a 3-3 aggregate score and qualification to the first round of the Caf Champions League on the away goals rule.

After throwing away a two-goal cushion to register a 2-2 away draw in Moroni on Sunday August 11, 2019, Côte d’Or trailed Fomboni FC when substitute Nourdine Mouhtare scored in the 88th minute after Côte d’Or goalkeeper Neddy Lesperance was caught in no man’s land.

But Ugandan Tony Kizito broke their heart with the equalising goal in the 91st minute after getting a second bite of the cherry after Fomboni goalkeeper had blocked his first attempt.

As for Mamelodi Sundowns, they kept their Caf Champions League campaign alive by thrashing AS Otoho d’Oyo 4-0 in the second leg of their preliminary round on Saturday evening at Lucas Moripe Stadium in South Africa.

Having gone down 2-1 to the Congolese club in Owando a fortnight ago, Sundowns scored four first half goals to book their place in the next round of the continent’s premier club competition. Uruguayan Gaston Sirono opened the scoring when he converted a 13th minute penalty.

They doubled their lead in the 25th minute when Sifiso Vilakazi found the back of the Oyo net after being set up by Sibusiso Vilakazi. Sirino grabbed his second goal of the night in the 34th minute, when he scored with a curling effort to make the score 3-0 in favour of the hosts.

Themba Zwane added the fourth goal four minutes later when he scored from close range after some good build up work from Vilakazi.