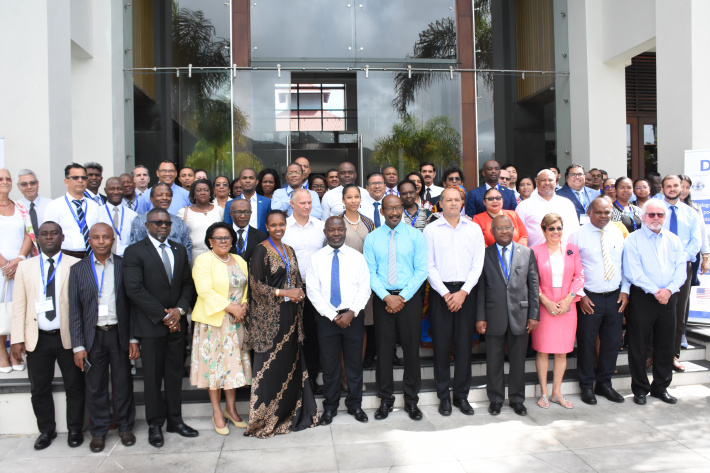 Delegates and guests in a souvenir photograph after the opening ceremony

The meeting was officially launched yesterday morning by Vice-President of the Republic of Seychelles and current chair of the IOC, Vincent Meriton, who remarked that the people from Indian Ocean states were themselves migrants from Africa, India, China, Europe and the Middle East noting the numerous diverse reasons for migration including “to aspire to a better life, to gain access to employment or quality education for children as well as to overcome strained political and social contexts, escape the risk of epidemic among other reasons.

“Our meeting clearly has a political dimension. It will, in effect, bring us to discuss public policies, human and social issues, environmental and climate. In fact, it will bring us to discuss the legitimate aspiration of men and women of our countries to live better, to live free, to live in security,” he said.

“I hope that this process, which is respectful of sovereignty and non-binding, if it is approved by the states, will take place over the long-term so that our powerful countries will always respond more effectively to the complex and multifaceted issues of migration. Migration management is a challenge of our time, but it also opens up opportunities for growth and social growth,” Mr Meriton stated during his official opening address.

Yesterday’s sessions continued through the day with the first session focused on intra-regional cooperation on migration and the opportunities and challenges faced by IOC countries. Following plenary discussions, the second session on promoting regional integration and cooperation through human mobility was held in the afternoon with emphasis on sustainable development of small island states.

Today’s session will continue with a session on promoting regional integration and cooperation through human mobility, migration data, migration and health and trade, tourism and free movement of persons and goods in the IOC.

The meeting is scheduled to end tomorrow after plenary discussions and the review and adoption of the meeting’s outcome document.

IOM regional director for Southern Africa, Charles Kwenin, highlighted the importance of inter-state dialogue on migration and commended Seychelles and Mauritius for the VISA regimes which serve to encourage migration and tourism.

“Migration as you know is inter-ministerial and is multi-faceted in the sense that different ministries dealing with different aspects of migration. In many countries you will find ministries of labour dealing with labour migration, home affairs and interior affairs dealing with emigration and immigration, so it is important that we have this inter-ministerial dialogue and at the same time, it provides the opportunity for inter-state dialogue bringing different governments together to have a common understanding of migration and also to have policy coherence because migration is so misunderstood and I think it is important that we have a common approach among member states, among ministers and among stakeholders,” Mr Kwenin said.

“The Indian Ocean states do not have locked neighbours as they are bordered by the vast ocean. Large oceanic states, the migration dynamics is such that you have many more labour migration especially to Seychelles and Mauritius in particular, and also at the same time, because of a lot more labour migration, there tends to be a lot of abuse, and it is also likely to have issues of human trafficking where unscrupulous people use labour to deceive people and end up in trafficking. The dynamics are such that, you have a lot more ageing population especially in Mauritius and Seychelles because they are higher income countries so they have comparatively higher life expectancy as compared to other countries,” Mr Kwenin said.

He noted that Seychelles ranks top of all African countries in terms of the VISA regime and commended the government of Seychelles for such.

Furthermore, Mr Kwenin noted that the meeting aims to highlight the issues faced by IOC member states since such challenges differ from states on mainland Africa.

“So in this meeting, we are hopeful that the member states will discuss the issues that are priority such as maritime security, issues such as security, environment and climate change, issues in trafficking of human beings, issues such as migration health because as people cross borders, there are health implications. Migration is a public health hazard as you cross borders, you have ebola, tuberculosis and a lot more issues that need to be addressed so we are hoping that by the end of this meeting, we will be able to conclude and agree on the need to establish a platform, a migration dialogue for the Indian Ocean countries, similar to what we have in ECOAS, the migration dialogue for SADC so it is important that for the Indian Ocean countries, even though they are all part of SADC, they also have their own vulnerabilities and specificities that need to be recognised because what may be of particular importance to the Indian Ocean countries, may not be necessarily be the priorities or the needs of mainland Africa, of countries who borders oceans and countries that borders land so we have to recognise that,” he concluded.