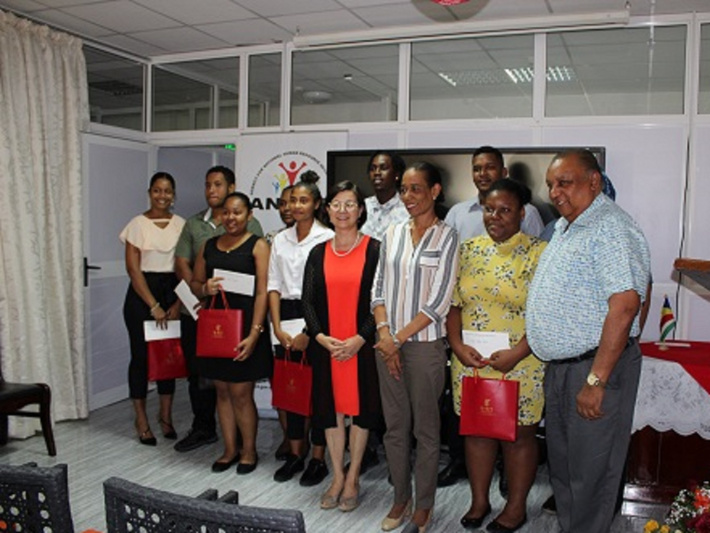 The nine awardees in a souvenir photograph with Ambassador Guo, Mrs Lauricourt and Mr Stravens

Nine Seychellois have been awarded scholarships from the Chinese government to further their studies in one of the nearly 300 designated universities under the programme.

They received their travelling documents during a ceremony held on Monday this week at the Agency for National Human Resource Development (ANHRD) boardroom.

Present at the event were the ambassador of the People’s Republic of China to Seychelles Guo Wei; John Stravens, chairperson of the ANHRD board; Nadia Lauricourt, the chief executive of the ANHRD; representatives from the Chinese embassy; the scholarship recipients; their parents and staff of the ANHRD.

In her address, Ambassador Guo urged the awardees to “seize this opportunity that is being offered to you” and to make the most of not only their lessons but also the Chinese culture.

She also gave her commitment that her government will continue to work on enhancing the good working relation that exists between China and Seychelles.

On her part, CEO Lauricourt commended the awardees on having made it this far and encouraged them to make the most of the opportunity that has been awarded to them.

She also thanked the Chinese government for its continued support through its bilateral relation dating back to the 1980s.

“You have provided our graduates, many of whom occupy key positions in the country, with the tools to bring about positive changes not only to their lives but our society as a whole,” she added.

In her vote of thanks on behalf of the scholarship awardees, Jelissa Julie thanked both the Chinese and Seychelles governments in assisting them with their dreams of furthering themselves in terms of education.

To her fellow scholarship recipients, she congratulated them on having made the decision to move forward with their education.

Ms Julie added that “out of all the decisions we could have made, we chose one, that we know for a fact, will bring us closer to our dreams, and for that I am proud of you”.

As for the parents present, Mrs Lauricourt assured them that their children will be in safe hands and will receive the support of the ANHRD throughout the duration of their studies.

The scholarship awardees will be departing for China on September 2, 2019 to undertake their studies in the following fields which are priority areas for the country; Psychiatry, Civil Engineering, Computer Science and Technology, Environmental Science, Political Theory, Arts and Design and International Business Administration.

Every year, the Chinese government offers scholarships to Seychellois citizens wanting to pursue tertiary studies at undergraduate and post graduate levels in China. The Chinese scholarship programs were introduced as a way to promote mutual understanding, cooperation and exchange in various fields between China and a number of different countries including Seychelles.