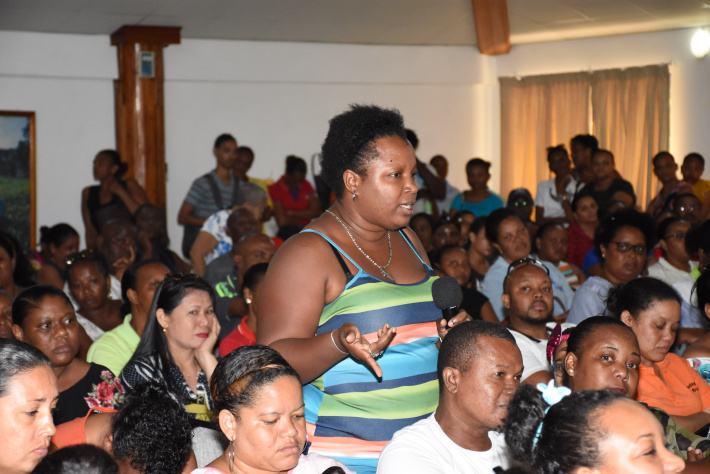 A parent putting her views across during the meeting

Following a meeting with parents of students attending La Rosière primary school, the Ministry of Education and Human Resource Development is expected to announce whether it will delay the start of the term for the students from this school for one week.

These primary school students are expected to move to Belonie secondary school as of the start of this year’s third trimester on Monday September 9, a move which comes about after structural deficiencies were identified in the structure of La Rosière school.

Meanwhile, secondary school students attending Belonie secondary school are set to move to the headquarters of the National Institute for Science, Technology and Innovation (Nisti) at Bel Ombre.

Yesterday’s meeting was a follow-up to a previous one held on August 9 and was full to the brim with La Rosière parents who were concerned over the impact of the movement to Belonie secondary school.

PS Decommarmond provided a progress report on the work for the move to the Belonie school premises, arrangements for transport and drop-offs, safety measures being undertaken and other relevant matters.

Parents were particular dissatisfied to learn that Seychelles Public Transport Corporation (SPTC) buses will be dropping their kids off at La Rosière premises after which a warden will have to walk with them up to Belonie secondary school.

Primary 3 and 4 students from La Rosière, who presently school at Mont Fleuri primary, will also have to make the same journey when they are dropped off at La Rosière in order to attend child minding.

Although they were made aware of wardens who will guide the students, parents still expressed their apprehension and concerns regarding the issue.

PS Decommarmond explained that to ease the move to Belonie, the ministry felt it necessary to construct three more classes at Belonie which have been built where the court once was.

A new parking area and multi-purpose court are also being constructed whilst the former agricultural space is being cleared to create a play area for the small children and bathroom equipment are being fitted to accommodate for their smaller size.

Given the lists of the renovation works that are yet to be completed and with school coming up in only five days, some parents requested that the ministry of education seriously considers delaying the start of school for La Rosière for one week.

Minister Simeon stated that they are putting pressure for the renovation to be completed by September 9 but reassured parents that they will be made aware of any delay today. 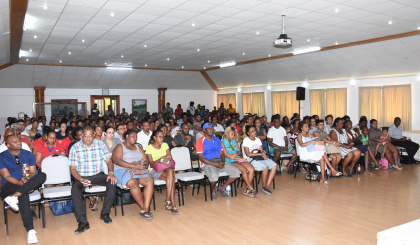 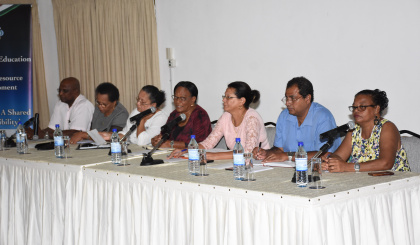 The well-attended meeting was chaired by Minister Simeon