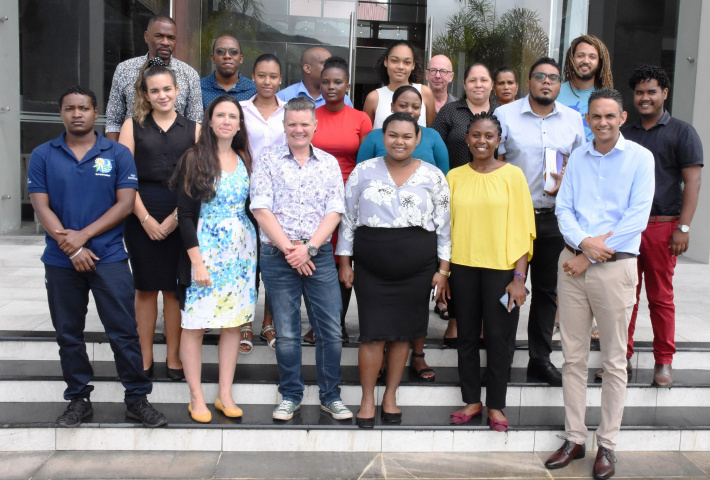 Souvenir photo of the delegates, experts and ministry officials

A group of Seychellois has followed a training to allow them to better collect data on marine litter and micro plastic.

This is in a bid to strengthen Seychelles’ evidence-based researches to better inform decision-makers so as to lessen the impacts of these types of pollution on people and the environment.

The August 6 to September 4 training was officially wrapped up yesterday with a workshop during which delegates showcased and shared their experiences.

The training was conducted by the Ministry of Environment, Energy and Climate Change in close collaboration with the United Nations Environment Program (UNEP), the Western Indian Ocean Marine Science Association (WIOMSA), the Nairobi convention and the technical expertise of the Commonwealth Scientific and Industrial Research Organisation (CSIRO).

The training included travelling along the coast to collect data. The delegates are expected to take forward the knowledge gained during the training into further marine litter monitoring efforts while the data collected during the activity will provide a baseline of information for better decision-making in the country.

“This training forms part of the efforts to collect data on litter that ends up in the sea in Seychelles. The participants conducted surveys on the coastline and in-land in areas such as marshes and rivers,” Fredrick Kinloch, director of waste management and standards at the ministry explained.

The trainers have equipped the local delegates with a system to collect data which will help them know what types of wastes we have in Seychelles, where these waste are going, so as to take the proper legislations based on these data in the future.

Dainese Quatre who is a ranger at the Seychelles National Parks Authority and is currently undertaking a Bachelor of Science (Bsc) in Environmental Science recounts her experience.

“This 10-day training was very intense but also exciting. We learned of simple ways to collect data in terms of plastic pollution and other waste. We were also made aware of the baselines for collecting data on the coastline, in-land and in rivers because at the moment we are only collecting information on the coastal areas,” said Ms Quatre.

She stated that the training will help the Seychelles National Parks Authority to undertake training of trainers since it is extremely involved in clean-up initiatives in marine and terrestrial parks and hence needs to systematically collect these data.

Further, Ms Quatre is hoping to use the information collected throughout the training during her final year project at university.

“A baseline will also benefit waste management for the whole country which will allow us to make better decisions in our management plans. This should not only be done on the inner islands but it would be great if we could also collect data from outer islands,” she concluded.

Meanwhile, Julio Moustache, a chief statistician at the Ministry of Environment, Energy and Climate Change stated that the training has allowed Seychelles to reflect on the tools and knowledge it currently has

“Many of the marine litter are those that we dispose of inland, near rivers and waterways, which finds their way on the beach, demonstrates our impact on the environment,” remarked Mr Moustache.

Plastic pollution has become so pervasive that a study has shown that most of us are ingesting as much as 5 grams of micro-plastics per week, which is the equivalent of eating a teaspoon of plastics or a credit card every week.

The study was conducted by Australian University of Newcastle and is a step forward in identifying the impact of plastic pollution and micro-plastic on human beings.