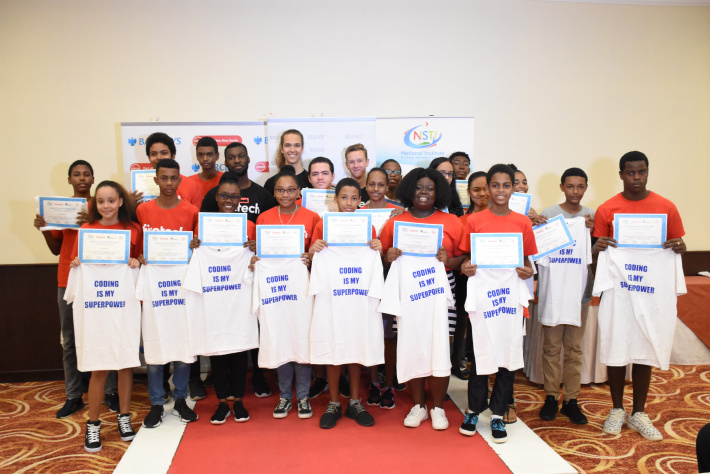 The students, representatives of sponsors, officials from Nisti and Fire Tech in a souvenir photo

A group of 20 secondary school students who took part in the immersive introduction to coding and programming sessions during the holiday break at the Beau Vallon secondary school, have received their certificate.

This followed their successful completion of the sessions and Saturday morning’s ceremony at the Berjaya Beau Vallon Bay hotel wasattended by the chief executive of the National Institute for Science, Technology and Innovation (Nisti), Xavier Estico, the chairman of Nisti Bernard Shamlaye, the parents of the awardees as well as the sponsors whose support made the sessions possible.

The programme was a collaboration between Nisti and an international coding firm Fire Tech, a UK-based company specialising in technology-focused camps for young people and was sponsored by the ABSA Group Limited, Seychelles Breweries and Round Table Seychelles.

Addressing everyone gathered for the occasion, Mr Estico said “the idea for a coding boot camp during school holidays was suggested by a concerned parent a couple of years ago who felt that there is a lack of activities during the school holidays.”

“After the boot camp a case study will be conducted by Fire Tech to evaluate its success rate and this will serve as the platform for the next one,” said Mr Estico.

Mr Estico also thanked the Beau Vallon secondary school for hosting the camp at its premises and for providing the school’s computer laboratory for the sessions.

The coding programme was delivered by a team of young instructors from Fire Tech in close collaboration with Nisti and the Beau Vallon secondary school and it has cost approximately 5,000 pounds per contestant and the cost was spread out between Seychelles Breweries, ABSA Group Limited, the Round Table and Nisti.

“We are proud that together with our partners, the ABSA Group Limited and the Seychelles Breweries, we have been able to deliver on our promise on what we believe to be the first step in achieving our goals of innovation and digital transformation,” pointed out Alain L’Etourdie, president of the Round Table.

“We sincerely hope that this programme has broaden your perception of coding and sparked an insatiable thirst to learn more, innovate more and create,” Mr L’Etourdie said.

He ended by asking all the students who took part in the workshop to keep learning and be innovative.

“Innovation comes from ADOPTING past ideas, ADAPTING them to current challenges and needs and IMPROVING them to make something better or new… Be an ambassador in your respective schools and form innovation clubs… there are so many fun ways to learn coding so introduce your friends and classmates and have fun along the way,” Mr L’Etourdie further added.

During the four-day workshop the 24 students learned web development and Python – a language in the backend of web development – as well as using Java Scripts for simple computer games.

Even though 24 students took part in the workshop when it started, only 20 completed the programme.

Bogdon Christian Anton, a tutor from Fire Tech noted that the kids were very eager to take part in the boot camp.

Student Trisha Pouponneau noted that the boot camp was really interesting as it was a new experience for her and her colleagues.

Trisha, who also delivered the vote of thanks at the ceremony, thanked the sponsors who made the programming journey a success as well as the tutors who mentored them all along.

David Pouponneau, Trisha’s father, noted that the coding bootcamp is an excellent idea as it is a way for students to learn something new during the holidays instead of staying cooped up in the house doing chores.