Artists, schools, businesses, entrepreneurs, fishers, marine conservation organisations and members of the general public who are interested in recycling plastic waste collected on Aldabra atoll can pick the waste they want to work with as raw materials for their creations.

The Seychelles Islands Foundation (SIF) in collaboration with the Land Waste Management Agency (LWMA) have for the past week been sending out notices for organisations and individuals interested to use these wastes as raw materials in their projects, to make their interest known so they can have access to the free of charge waste from the Aldabra clean-up project which are currently stockpiled at the LWMA premises at Providence.

For health and safety reasons, all those taking part must be aged 16 years or above and anyone under 18 years must have a legal guardian sign for permission to take part.

Jeremy Raguain, the project officer from SIF said yesterday that only 20 or so organisations and educational institutions including some individuals have so far shown interest to choose from the plastic waste debris stockpile. He noted that interested persons can still call to book a spot to have their pick.

Raguain said interested parties will have at their disposal to choose from waste material ranging from 60,000 flip flops and other plastic consumer debris like tooth brushes, cigarette lighters, glass bottles and others drifted onto the Aldabra shores from other countries and also debris made up of industrial fishing gears like nets, buoys, ropes and fishing fads.

Those who will take part in the event will have to bring their own protection gears, gunnies and slings as well as transport to remove the waste from the site after sorting.

Mr Raguain said officials from SIF will be present on the two days to help out with the sorting and also to record the waste being taken away. He further said that for the record, those taking part will also be asked what they will be doing with the plastics waste picked.

In February and March this year, a group of seven volunteers from Seychelles and five volunteers from University of Oxford, United Kingdom carried out a five-week expedition called the ‘Aldabra Clean-up Project’ to clear the atoll of man-made rubbish, especially plastics. During the five-week campaign, some 25,750kg of marine debris were removed from Aldabra. It was a clean-up expedition organised by the SIF in collaboration with the University of Oxford and six sponsors – Mauritius Commercial Bank (MCB), Cable & Wireless (Seychelles), Seychelles Conservation and Climate Adaptation Trust (SEYCCAT), United Concrete Products Seychelles (UCPS), Raffles Hotel and Eden Island Development Company (EIDC). 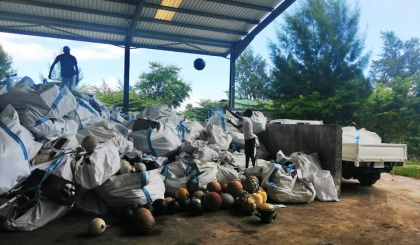