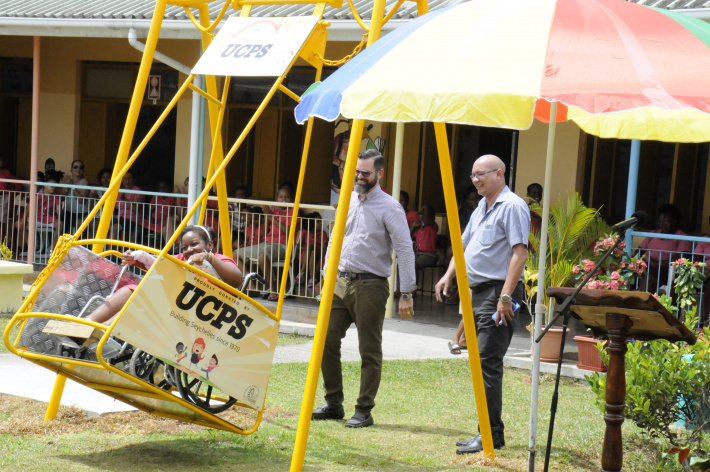 Wheelchair-bound pupils going to the School for the Exceptional Child will from now on also be able to fully enjoy the fun of swinging and being pushed while securely fastened in the first wheelchair swing that has been put in place in the school’s playground.

An initiative of ‘Make A Child Smile’, the swing has been built locally by François Fanchette, a professional metal smith and owner of New Steel Company situated at Union Vale and sponsored by United Concrete Products Seychelles (UCPS).

On Tuesday morning, an excited group of pupils, teachers, staff of the school joined by Roche Caïman’s National Assembly member Audrey Vidot, witnessed the official handover of the much-appreciated and welcomed gift by the sponsors.

‘Make a Child Smile’ chairperson Clifford Mondon and the chief executive of UCPS Gregory Albert handed over the special swing to the school.

Addressing the happy audience and excited recipients of the gift, Mr Mondon said “I was browsing on Facebook when I came upon a video of another version of the swing being used in the United States of America. A child on a wheelchair was on the swing and his parents were giving him a push. I was really emotional by the happiness and the smile that I saw on the child’s face and I promised myself that I will get one for wheelchair-bound children in Seychelles.”

Mr Mondon noted that after some research he realised that it would cost around R30,000 to import the ready-built swing, so this was when he sought to have it made locally and once he was informed of the project, Mr Joe Albert of UCPS gladly agreed to sponsor the swing which has cost a mere R9,000, three times less than an imported one.

“It’s a pleasure to be here today because at UCPS we are always looking for ways to help and contribute in society and it was a great pleasure for us to agree to sponsor the swing,” said Mr Albert.

He continued by expressing his company’s pride to be associated with ‘Make a Child Smile’ to make this donation possible.

The head teacher of the school, Heidi Francourt thanked UCPS and ‘Make a Child Smile’ for their generous donation.

“It’s not easy for our wheelchair-bound pupils to enjoy recess like other pupils and this donation will help them and bring joy to them too. The swing is a blessing as it will give them a sense of freedom and independence,” said Ms Francourt.

On behalf of the school, the education ministry, as well as the parents, Ms Francourt expressed her gratitude to the donors and sponsors.

The first person to try out the swing was Serena Estico whose face lit up while Mr Albert pushed her for the first time on the brand new swing, and one could feel that she was very happy.

Mr Mondon noted that the swing will make a big difference for kids in wheelchairs which is why he is looking to have one at the ‘Paradis des Enfants’ playground in town. He added that he is ready to welcome a partnership with government or other interested businesses to put in place similar swings in different children’s playgrounds around the country. 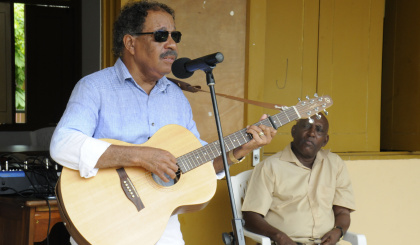 Jean Ally performing for the guests and children 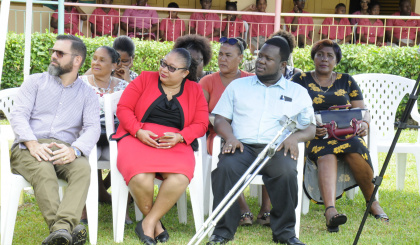 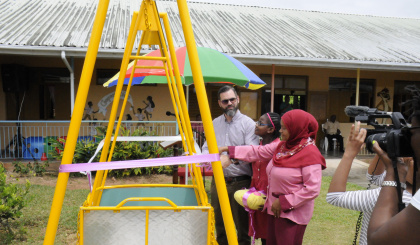 The official handover of the special swing