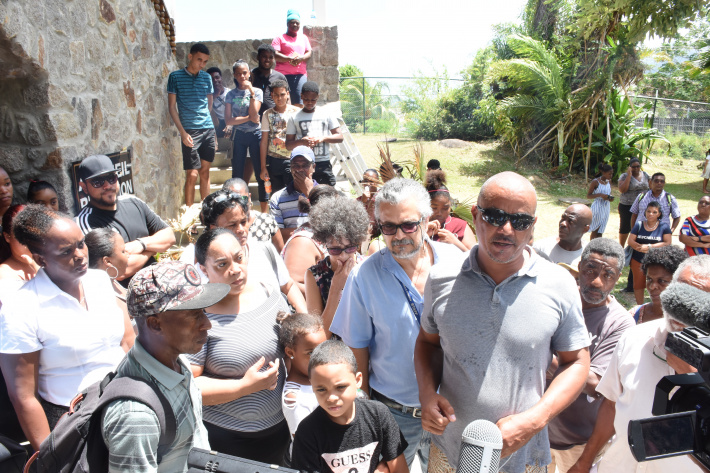 The Ministry of Education and Human Resource Development (MEHRD) has confirmed that the start of the third semester for P1, P2, P5 and P6 pupils from La Rosière primary school and S1, S4 and S5 students from Belonie secondary school is Monday September 16 after a week’s delay.

Minister Simeon was speaking in a press conference at Nisti yesterday afternoon following visits to the two educational venues early in the morning in the presence of other high officials from her ministry.

“We are not 100% ready as an institution but are ready to start classes on Monday. So we expect to see all students in class on Monday,” Minister Simeon said.

Before their children start their third semester for 2019 on Monday, parents were also invited to visit their children’s new place of learning at Nisti and the Belonie secondary school yesterday, where they were also given the bus schedule. (The schedule is being published separately on page 5).

Most of the classrooms have been completed with only some minor work to be done over the weekend.

The move also includes transport arrangements to and from both areas from the student’s respective districts or regions.

The parents of the students from the La Rosière primary were 100% satisfied with the renovation work done at the Belonie secondary school which will cater for their children in view of the spaciousness of the classrooms which have been fitted with new chairs and new desks.

Their only concerns were the height of the classrooms on the second floor, especially the varendah, for P2 students and dust due to ongoing construction at the school.

There were mixed feelings from parents whose children will be using Nisti as their temporary learning institution. While most were happy with the place, some were not too happy with the amount of renovation work done on the building and surroundings which to them the whole renovation should have been finished first before the students could enter.

Most of the complaints were against the smell of paint, dust and noise from the ongoing construction. Some suggested the postponement of the third semester for another week or two, allowing for the complete renovation so that the place, according to them, will be more conducive for the students when they enter. Some even threatened not to send their children to school on Monday.

“We have taken all necessary measures to have the best conditions for learning and safety of the students at the new school and if the parents feel that they do not want to send their children to school they should remember that they are responsible for their children’s education and we are just doing whatever we can to make sure that their children get the best education in a safe and conducive environment. Education is a shared responsibility,” Minister Simeon said.

Responding to those complaints, Minister Simeon said minor works are needed to completely finish the renovation at the two sites and with continued work over the weekend, those minor works will be over when students enter on Monday. As for the classrooms they will remain open over the weekend to remove the smell of paint and apart from mopping certain areas inside, the exterior will be pressure cleaned with water. To eliminate noise pollution, only light renovation work will be conducted during class hours and heavy renovation work will continue to improve the standards on both sites will be conducted after class hours and during the weekend.

The teachers from both La Rosière primary and Belonie secondary said that they have been putting a lot of work and effort during the past few days to prepare the classrooms and now with the classrooms ready they are also ready to start classes.

They said they see no reason for students not to attend classes on Monday and parents should also bear in mind the limited time available to complete the curriculum for international and local exams.

While waiting for some facilities such as the practical science lab to be ready, the Belonie secondary students will share this facility at the Beau Vallon secondary school. This arrangement will also apply to the sporting facilities. They will also use the sporting facility at the Bel Ombre primary school while work is ongoing on a multi-purpose court at their premises.

She reassured all that the renovation works, which have not been an easy task for the ministry, will be over in two weeks’ time. 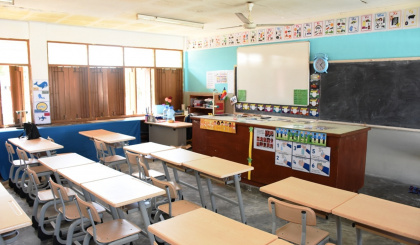 One of the refurbished classrooms at the Belonie secondary school