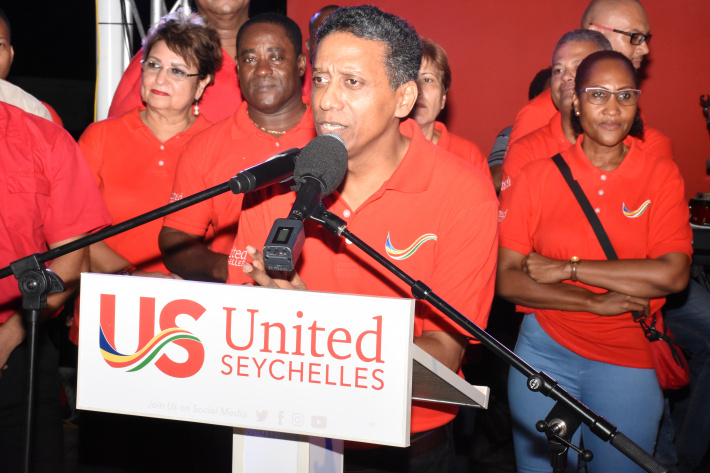 Although the election commission has yet to set a definite date for the presidential election in 2020, the political parties in Seychelles are gearing up to start their campaigns.

The current ruling party, United Seychelles, officially presented their presidential candidate, Danny Faure, to their supporters and activists from all districts on Mahé, Praslin and La Digue during a public gathering on Saturday evening.

The event was held at the Maison du Peuple car park, which is also referred to as the United Square.

It was the first that time that Mr Faure, who is also the incumbent president, officially addressed US supporters since his nomination was approved at the party’s 33rd congress on August 24, 2019.

In his address, Mr Faure noted that the US election machinery is getting geared up for the elections and will be ready to face its opponents.

“I would like to thank United Seychelles for approving my nomination to represent the party in next year’s election, but I also want to thank you all this evening because October 16 will mark exactly three years since you put me in the office at State House,” Mr Faure also remarked.

He further thanked US supporters for their maturity and tolerance during these three years and for turning the other cheek when faced with insults and jokes.

“Like me, you have reflected, listened and observed. You were mocked but like me you have retained your cool and remained calm. This is our strength,” he affirmed.

Mr Faure took the opportunity to describe himself as the captain of a ship who has had to navigate difficult waters such as when the main opposition, Linyon Demokratik Seselwa (LDS), blocked the nomination of his ministerial candidates – a feat afforded to them since they hold majority seats in the National Assembly.

“Nonetheless I continued to navigate, I held strong and fast because I know that there are others who are also standing firm.”

It was clear from their speeches that US will be taking on a presidential campaign based on the principles of national unity and forgiveness since “Seychelles is too small for fights and divisions”.

The public gathering also included various musical performances in which Mr Faure joined in by dancing sega and jamming to Peter Tosh’s classic ‘Glasshouse’ and Bob Marley’s ‘One Love’.

United Seychelles has yet to nominate and endorse a running mate for Mr Faure for the upcoming election. 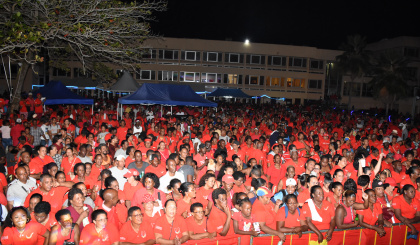 ‘Our thoughts this Christmas go out to those who are in need and are facing challenging times’ | 24.12.2019

US condemns “irresponsible and politically-motivated” actions of customs staff in Wednesday’s protests | 27.09.2019