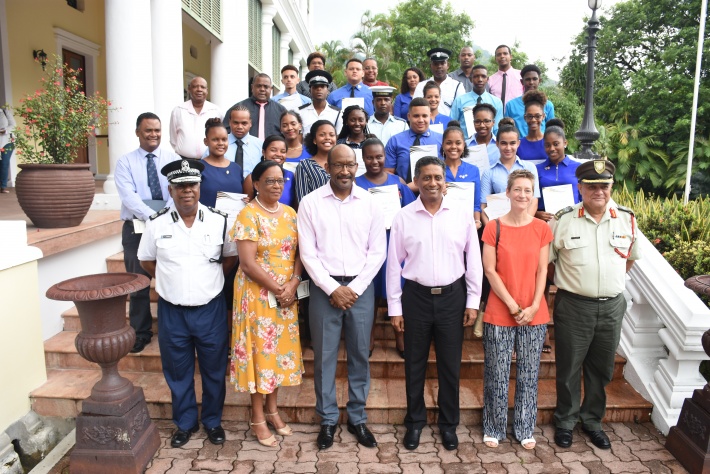 They are the 10th cohort to earn the gold standard since the re-introduction of the Duke of Edinburgh’s International programme in 2000.

The new gold standard award holders were presented with their pins and certificates by President Danny Faure – who is the patron of the programme - during a brief ceremony at State House in the presence of their families.

In his speech, the chairman of the National Awards Authority and principal secretary for youths and sports, Fabian Palmyre, noted that the award is well suited to address the challenges faced by youths given that its primary objective is focused on creating the environment and opportunity for youths to develop healthy lifestyles and good values.

In the last 10 years the Duke of Edinburgh’s international award has helped mould a total of 6177 young people of whom 894 attained the bronze level, 454 the silver and 217 the gold standard.

Mr Palmyre noted that thanks to its dedicated award leaders, the programme is doing “a fantastic work” but however noted that the programme’s recipients need to contribute more towards the wellbeing of other young people.

In that respect, he urged the awardees present as well as past recipients to become active members of the Gold Award Holders Association (GAHA) and other organisations working with or for the youths.

He stressed that the programme’s activities such as service, development of skills, physical recreations, adventurous journeys and residential projects have all been designed to equip them for such a task.

The ceremony concluded with a vote of thanks by Darius Talma, one of the recipients, followed by refreshments.