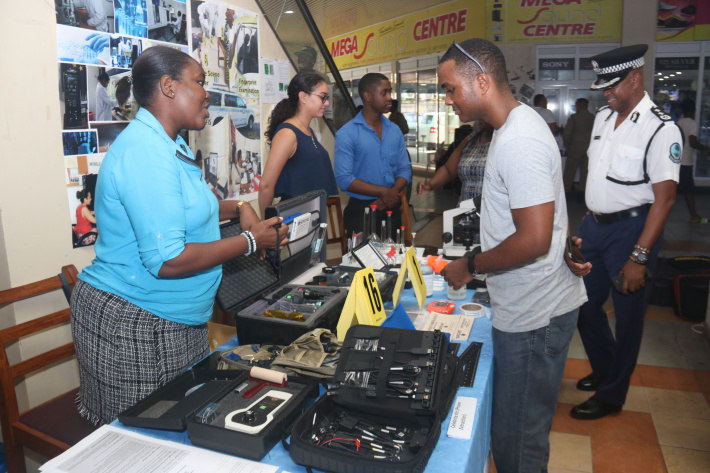 People, especially the young ones, coming to the Orion Mall on Saturday, were able to interact with police officers from the different units on job opportunities available within the police force.

This was through a recruitment fair organised by the Seychelles Police as part of activities to launch the police week, a week-long activities to mark the National Police Day which coincided with the International Peace Day.

The aim of the fair was to seek potential candidates wanting to join the force so as to diligently and effectively serve the people and the community through maintaining law and order.

The informative stalls, some of which displaying equipment used on daily duties, was from the administration, the Scientific Support and Criminal Record Bureau, Marine Police, Dog Unit and Respond Services – the armed paramilitary branch.

Apart from the posts of special constables and constables, the Police have also come up with a new initiative to seek for and enroll university graduates and degree holders employing them to the rank of sergeants

Reading a message from the Commissioner of Police, Kishnan Labonte, who was not present, Assistant Commissioner Songor said that the “Seychelles Police Force management believes that investment in its human capital is the fundamental basis on which it depends to prevent, reduce and investigate crime. Planned events during the week will show appreciation for the duties performed by our officers and civilian staff on a daily basis which oftentimes go by unnoticed,” the message read.

“The Seychelles Police Force’s approach to policing is based on an inclusive and integrated approach which involves a buy in from all levels of the government, civil society and the general public. It is only by working together that we will be able to achieve success in making our country safe from crime,” the message continued.

It also made note that the police are gravely concern about crimes against women and children as well as drug and alcohol abuse in the society. It made reference to urging the communities to work harder to isolate criminals and rid society of these crimes which are the causes of so much strife and suffering. It also urged the community to work collaboratively with the police and to respect police officers.

Speaking to the press, Chief Superintendent Francis Sangoire said the most challenging part of police work is more often dealing with difficult people and that maybe this is one among other reasons why young people do not want to join the force.

He reassured though that with training, a police officer gets to have the confidence and knowledge of how to deal with difficult people.

“Another challenge we face in trying to get young people to join the force is the shift work. The police work day and night, so our work is shift work. We are mandated to maintain law and order in the country on a 24-hour basis so we have to do it on shifts,” Chief Superintendent Sangoire said.

Among some other challenges include salary package and not wanting to wear the police uniform for fear of being easily recognised.

“There is an interesting salary package that we have just introduced about two months ago with a constable earning up to R12,000 including allowances and we also provide training locally and internationally for our police officers,” he noted.

“On the issue of being known by persons you have arrested while in uniform or that you are reluctant to arrest them because you know them and they know you, as a police officer if the rule of law has been applied and the person or persons have been treated fairly according to the law, I do not see any reason for frictions between the two parties. For the police, wearing the uniform is where your basic start,” Chief Superintendent Sangoire explained.

Assistant superintendent Aubrey Quatre, in charge of SSCRB, said that with the aim of having a full fledge forensic laboratory, his department is targetting university graduates for specialisation in certain fields.

He noted though that on the job training can also be given to potential candidates with lower academic qualifications to work on crime scenes or at the criminal record section but with the possibility for them to become experts also through training provided.

According to Superintendent Peter Dacambra , in charge of Respond Services, all police officers have to undergo a two-week intensive training in Use of Force, through his department, before being issued the utility belt with all necessary defensive equipment that they place around their waists. 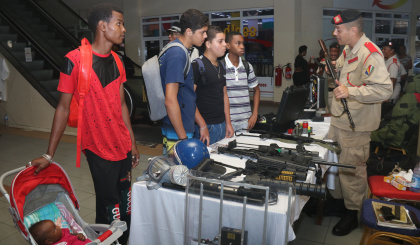