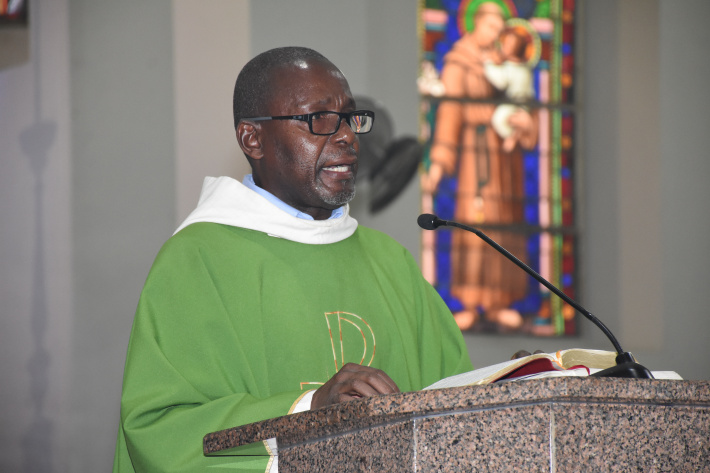 The Seychelles Police Force yesterday commemorated Police Day, which coincides with the International Day of Peace on September 21, with a special thanksgiving mass at the Cathedral of Immaculate Conception, Victoria.

The mass presided over by Father David Alcindor was attended by several officials from the force as well as members of the public who were invited to join the officers for the service. A very special guest, Nathan Laporte, a young boy diagnosed with cystic fibrosis from a young age whose dream is to be a police officer, was also present in the first row, in his police uniform presented to him by the force earlier this year.

Father Alcindor emphasised the importance of the service to police officers whose jobs involve an element of risk on a daily basis.

He thanked God for guiding and protecting the force that help to protect the citizens of Seychelles and encouraged them to be faithful and to always carry God with them during their duties.

“We are all here to pray for you and to pray with you. The nature of your job, you need the guidance of a higher power, of our God and the Holy Spirit. We pray that wit God’s grace, our police will be able to overcome the struggles and challenges that they face so that they can offer to the public a good service,” Father Alcindor stated.

Father Alcindor also urged the public to be more understanding towards the police force and to offer support to them on account of the very challenging nature of their jobs.

“Often times we hear people speaking negatively about the police. We’ve even seen it on social media but we need to realise that behind the uniform is also a person, a person capable of making mistakes just like all of us do. I urge our people to offer more support for the forces so they can improve and they will be motivated to do better,” he said.

“As for you officers, do not take note of the negative comments but rather be positive and ask God for his guidance, light and for him to illuminate your paths,” he said.

Father Alcindor continued to encourage the officers to work towards providing better service to the people of Seychelles and asked God to help the force better manage their limited resources.

Speaking about money, Father Adrienne acknowledged money as a necessity to everyone but warned against idolising money and materialistic ways.

He noted that certain people in the country idolise money and made mention of persons involved in the illegal drug trade encouraging officers to try their best to capture and bring to justice such persons who are “destroying our society, country, our children, our fellow brothers and sisters” in search of wealth.

“True wealth and prosperity lies with God and only God,” Father Alcindor stated to conclude.

Deputy Commissioner of Police Ted Barbe also addressed the officers and recounted a typical day in the life of an officer stating that they experience a whirlwind of emotions within one single shift.

“I myself have experienced all those emotions every day during my 21 years in the force and I thank God that I have made it thus far, for always guiding me and keeping me safe and I pray that he continues to look down on all of you,” Mr Barbe stated.

Mr Barbe also made an announcement inviting a young smiling Nathan to accept a monetary donation collected by officers from the force.

The mass was followed by a sports day for officers and their families. More events are scheduled for this week including a ceremony to recognise and reward long-serving employees, long-service awards for in-service officers and talks and lectures at educational institutions across the country. 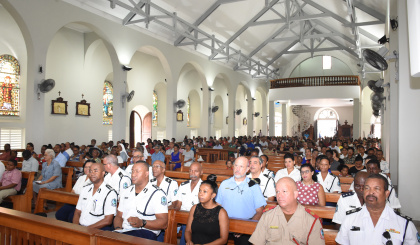 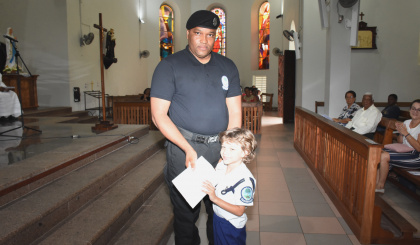