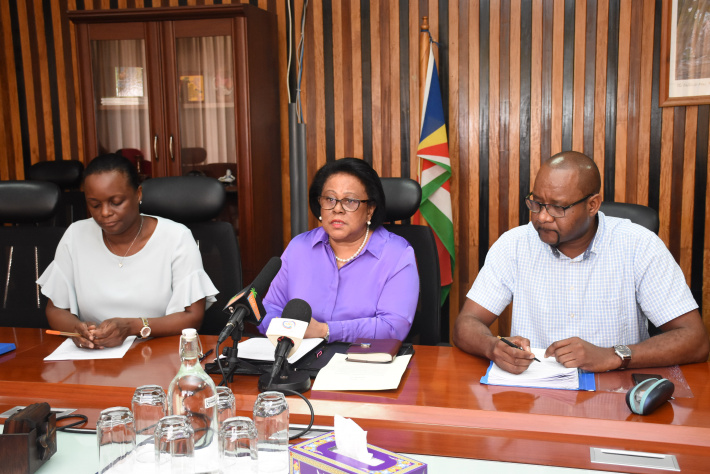 Minister Telemaque, flanked by top officials from her ministry, speaking to the press on Friday

As from October 1, 2019 the work of stevedores, monies paid to them and rate charged per tonne of fish they unload will all be regulated under a new law which the minister responsible for employment signed on Friday morning.

The new regulation, a revised version of the one passed in May last year, follows a series of intense consultations after stevedores voiced concerns over their working conditions, pay and other work related issues at the highest level.

Several consultative meetings have been held with various concerned stakeholders and representatives of the stevedores.

In May last year a regulation was passed to ensure their situation is given due consideration and they are paid certain benefits.

These included a retainer allowance, compensation, an increase in the rate from R3.50 to R3.75 charge per tonne of fish unloaded. But the Minister for Employment, Immigration and Civil Status Myriam Telemaque confirmed on Friday in a meeting with the press that unfortunately the regulation was not enforced due to some legal technicalities. As a result, the ministry took some time to review it completely and to ensure, through intense consultations with different stakeholders, namely the fishing vessels’ handling agents and the stevedores themselves that the revised version satisfies and benefits all parties.

She further admitted that there was not enough consultation with concerned parties but emphasised that for this second time around consultations have been intense and all issues pertinent to stevedores have been explored.

She also pointed out that all the handling agent companies have been asked to ensure that unloading work is spread out evenly among all stevedoring teams.

The revised regulation provides for stevedores to be paid an annual gratuity to be calculated on the amount of money paid to them for the time they have worked. All stevedores working from June 1, 2018 to May 31, 2019 will be paid a 3.5% gratuity on the total sum paid to them during that period of time.

The regulation also provides for stevedores to be able to secure work from all three handling agents, namely Hunt Deltel, Land Marine and Seaward which are covered under the regulation which was not the case in the past.

All other stevedoring activities are also covered under this new regulation something which was also not the case before, making it possible to revise, if there is a need, all the above agreed sum mentioned including the annual gratuity.

The regulation also provides for the minister to set up a committee comprising relevant actors in the fishing sector, the handling agents, representatives of the stevedores and other concerned parties to discuss when necessary the different aspects related to review of rate, percentage among other related matters.

Meanwhile Minister Telemaque has pointed out that some stevedores working with the Ile Du Port Handling Services (IPHS) will not be covered by the new regulation as IPHS falls in the international trade zone.

But the ministry has asked for a meeting with IPHS to inform the company of the provisions of the new regulation.

Minister Telemaque has thanked the Attorney General, Frank Ally, officials of her ministry, Seychelles Federation of Workers Union and all the various stakeholders, stevedores themselves who have contributed greatly to having a strong regulation that covers this group of around 800 workers.