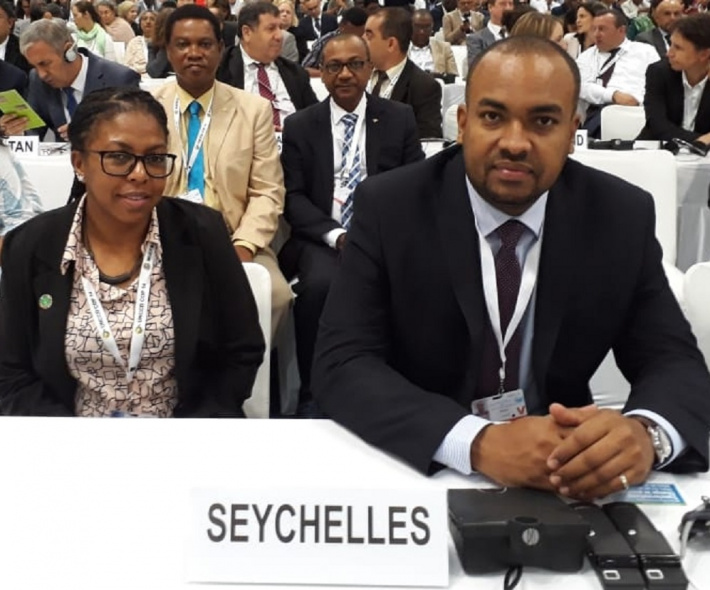 The Seychelles delegation at the COP 14

Seyhcelles was represented at the 14th Conference of the Parties (COP 14) to the United Nations to Combat Desertification (UNCCD) which took place from September 2 to 13, 2019 in India.

‘Restore Life, Sustain Future’was the chosen theme for this conference.

Seychelles ratified the Convention in 1997 and since then the country through different schemes has undertaken several donor funded projects relating to land degradation projects. The latter include those relating to coastal erosion adaptation and rehabilitation programmes, capacity building on sustainable land management and the development and implementation of land use plans.

Parties to the Convention have agreed to make the Sustainable Development Goal target of achieving land degradation neutrality by 2030 a national target for action.

Ministers also adopted the New Delhi Declaration ‘Investing in Land and Unlocking Opportunities’, which consists of a series of 35 decisions.

India, the host of COP 14, announced its commitment to enhance implementation of the UNCCD among other actions.

The country parties discussed the implementation modalities of the Convention for the next two years.

More than 8,000 participants including more than 100 ministers and high-level officials attended the COP.

Seychelles was represented at the COP by Minister Wallace Cosgrow, Minister for Environment, Energy and Climate Change (who attended the high-level segment from September 9 - 11. Nanette Laure (the UNCCD National Focal Point for Seychelles) and John Quilindo (UNCCD Alternate Focal Point for Seychelles), as well as Selby Pillay (Seychelles ambassador to India) also joined the Seychelles delegation at the official opening of the high-level segment of the COP on September 9.