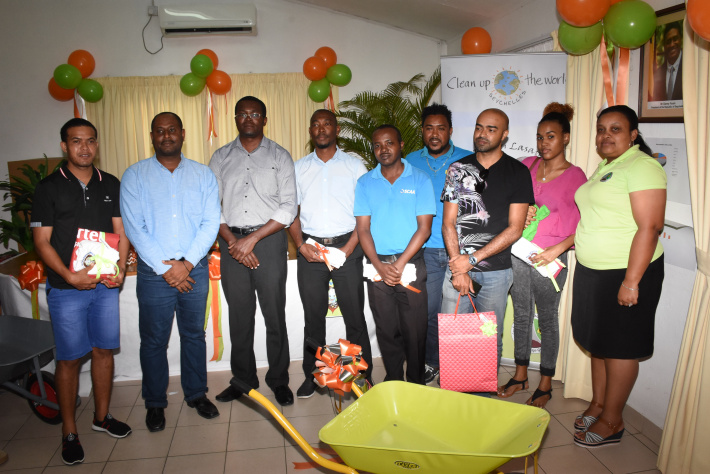 The prize winners in a souvenir photograph with Mr Joubert

Over 1,000 tonnes of waste collected

More than one million kg (or 1,000 tonnes) worth of waste was collected during this year’s Clean Up The World campaign from September 20 to 25.

This was revealed yesterday during a ceremony organised by the Land Waste Management Agency (LWMA) to officially wrap up its Clean Up The World campaign.

The ceremony, held at the LWMA’s office at English River, consisted of a presentation of the results for its waste collection and presentation of prizes to the winners of its radio quizzes.

The chief executive of LWMA, Flavien Joubert, revealed that the agency has noted a slight increase in the waste collected during the campaign this year compared to 2018.

The more than one million kg worth of waste was collected over the period of six days, starting on September 20 and ending on Wednesday this week.

“Halfway through our campaign we could see a reduction of waste but given that we continued up to Wednesday we saw that the tonnage continued to increase as well as the number of trips,” Mr Joubert explained.

He nonetheless noted that the figures are more or less what the LWMA was expecting.

Mr Joubert further added that the figures for Praslin and La Digue are estimations since these islands do not have a scale to measure the wastes collected.

“The majority of waste collected on Praslin and La Digue were glass items, metals and soft plastics. And what is interesting 18% of the waste collected were soft plastic which in itself is alarming since plastic are light so you need to have collected an astronomical amount of plastic to record 18%.”

As for Mahé, 53% of the wastes were mixed waste and 7% were soft plastic.

“Mixed waste includes all different types of waste that could not be properly sorted such as places where people conduct various activities and over time the waste has just mixed together. So it shows that there are potentially more plastics in our environment.”

Glass items continued to dominate the waste collection chart with 26% on Mahé and 34% on Praslin and La Digue.

“This represents mainly alcohol glass bottles, particularly imported drinks that cannot be redeemed like local ones. It shows that perhaps if these glass bottles were levied and were part of a refund system then we would not see them much in the environment.”

A scheme is being planned in this regard by the environment department, he noted.

LWMA also presented 29 persons with various prizes they had won from radio quizzes relating to waste management and environment, competitions which LWMA hosted on Paradise FM and K Radio.

Their prizes varied from Maz Million and Regatta lottery tickets, Deepam Cinema tickets, goodies from a number of sponsors and the star prizes were wheelbarrows, gardening sets and composts, sponsored by the LWMA.