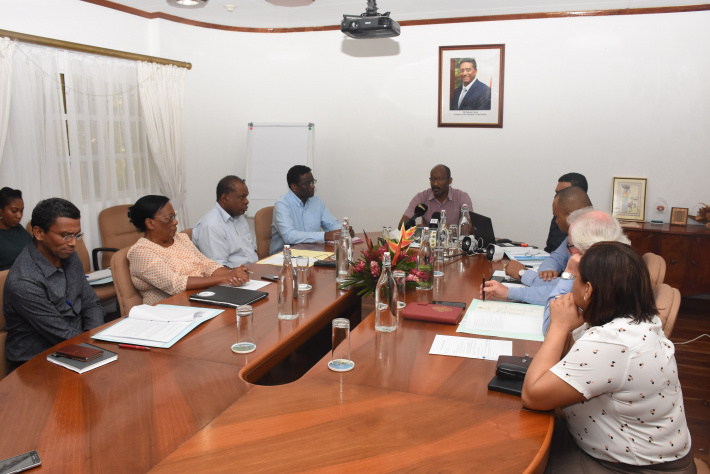 The Seychelles Blue Economy Council met yesterday afternoon at State House in its first session to discuss the development within the Blue Economy sector.

The meeting was chaired by Vice-President Vincent Meriton in his capacity as the Minister for Blue Economy.

The establishment of the Blue Economy Council was approved by President Danny Faure recently and the other members of the council present at the meeting were ministers Charles Bastienne, Didier Dogley, Wallace Cosgrow, Maurice Loustau-Lalanne, Jeanne Simeon and Pamela Charlette.

Apart from the introduction of the council members and the aim of the council, some of the issues discussed yesterday were the ocean management, the fisheries agreement, the work of the Blue Economy department among other relevant issues and also on the terms and reference of a high-level committee comprising the private sector, government officials, NGOs and others which will be set up.

Addressing the council, Vice-President Meriton mentioned that with the development of the Blue Economy moving at a fast past, the establishment of the council is yet another milestone in furthering its development.

Vice-President Meriton noted that the Blue Economy is not just about winning awards but also about securing a profitable future for our people by sustainably managing the resources of our large ocean state.

“We, like many other nations, face considerable vulnerabilities and effects of climate change. In order to achieve sustainable development and the successful implementation of the Blue Economy, there is a need to shift from our traditional commodity-based economy to one of sustainable ocean-based economy,” Vice- President Meriton said, noting that the Blue Economy domestically requires the setting up of strategic directions for future investment and development.

Among its functions, the council is expected to provide leadership to strengthen Seychelles ocean governance mechanism and enhance coordination among ministries, departments, agencies and other governmental bodies involved in the Blue Economy.

This will be done by creating the enabling environment for Seychelles to transition from ‘blue sectors’ working in silos towards better coordination and domestication of the Blue Economy concept, adopting new business models across government so as to mainstream the Blue Economy vision and approach in development plans, prioritising projects to demonstrate the value of the Blue Economy as an integrating framework for developing planning and policy reforms and promoting and developing a culture of shared responsibilities across government to manage ocean related projects and to implement the Seychelles Blue Economy agenda among others.

The special advisor for the vice-president in the Blue Economy department, Mr Michaud, said that the Blue Economy is not just about the ocean and fishing but cross cut into other sectors like education, health, industries etc…

“We have to make sure that all the ministries and departments don’t work in silos. There are cross cutting issues such as if you want to develop fish processing, you need to have land, infrastructure, services and the resources and this is why it is important to have the different stakeholders on board and to meet and if there are issues the council will decide on what steps to take,” Mr Michaud said.

The council will meet twice a year.