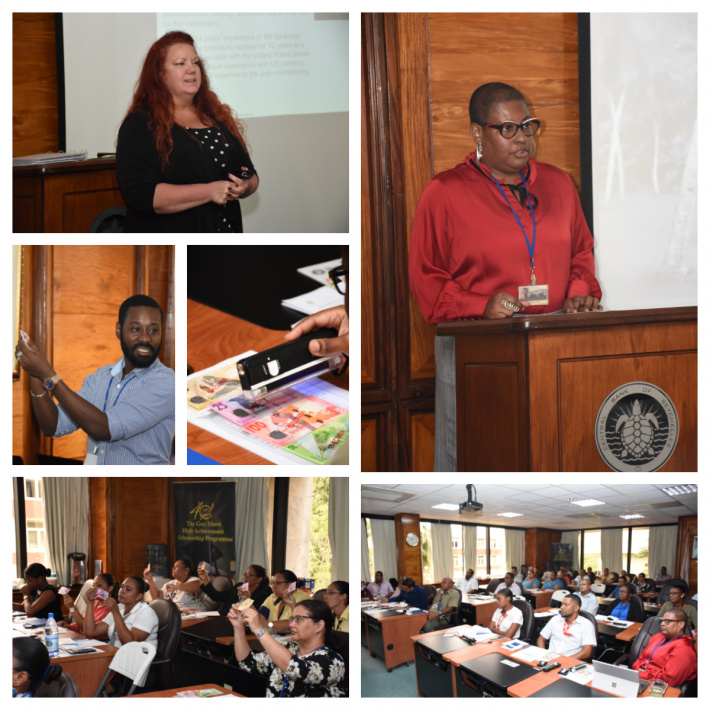 The Central Bank of Seychelles (CBS) is hosting a multi-stakeholder seminar to stimulate discussion and engagement on currency counterfeiting.

The four-day seminar, which is being held at the CBS Guy Morel Training, opened yesterday and will run until Thursday October 10, 2019.

This is being done in collaboration with De La Rue – a United Kingdom-based company that manufactures security printed products, including legal tender banknotes.

Discussions are expected to centre on the counterfeiting trends both globally and locally. In Seychelles the issue of counterfeiting relates to the local currency as well as foreign currencies particularly the US Dollar, Euro and Pound Sterling banknotes.

The participants will also be given an insight on developments with regard to enhancing security features of banknotes as well as attempts by criminals to gain access to equipment and use advancement in technologies for their counterfeiting activities.

Availability of new technologies to detect counterfeit banknotes, procedures to follow when faced with counterfeiters and difficulties relating to investigation of counterfeiting activities will also be explored.

In her welcoming remarks at the start of the seminar, the CBS Governor, Caroline Abel, noted that the Central Bank has over the years taken steps to maintain confidence in the local currency, mentioning the issuing of a new family of banknotes in 2016 with enhanced security features.

She nevertheless reiterated the need for continued vigilance and proactiveness as counterfeiters are also keeping pace with technologies for their criminal activities.

“The issue of counterfeiting should be a matter of concern not only for us as the currency issuing agent, but also for the commercial banks, other financial institutions, as well as other partners, such as the law enforcement and regulatory authorities, and the public at large,” said Ms Abel.

The Governor also reinforced the need for enhanced public awareness and education saying: “From this workshop, let us individually and collectively find ways to relay the message to the population. Each and every individual can play a role in maintaining confidence in our currency by being encouraged to ‘know our money’. Having a population that is knowledgeable and familiar with the security features of genuine banknotes can surely contribute towards efforts to prevent the introduction of fake money into our financial system, as well as minimising economic losses.”

Besides the Central Bank staff, the seminar is seeing the participation of representatives of commercial banks, the Seychelles Credit Union, bureaux de change and the police, among other relevant stakeholders.