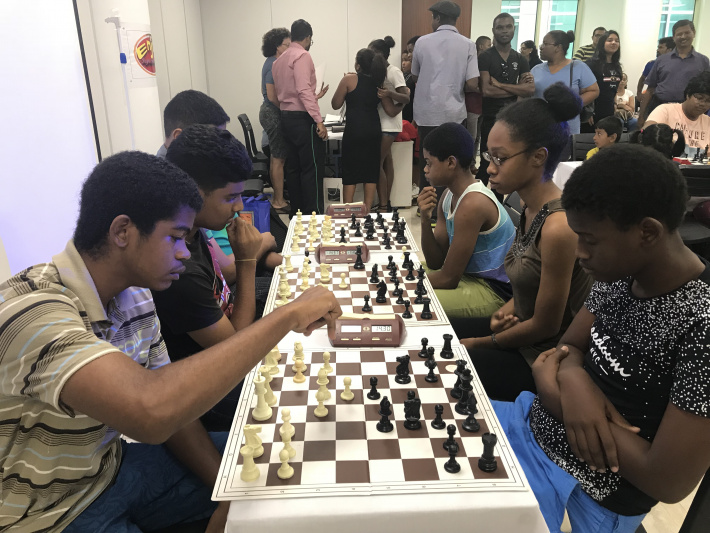 Some of the chesslers in action at last year’s competition

Once again, chess enthusiasts are being invited for the annual Seychelles-India Day tournament which will take place on Saturday October 19 at the Indian High Commission Multipurpose Hall, on the third floor of the Maison Esplanade building, on Francis Rachel Street.

The yearly event is part of activities for the Seychelles-India Day which promotes friendship between the two countries.

The Seychelles-India Day tournament will begin at 8am.

The competition will be contested in three categories, including the under-14 years old, the under-18 years old and open category.

All completed registration forms should be submitted to Ragul Pillay before Wednesday October 16. Mr Pillay can be reached on 2725538, or through email – rpillay412@gmail.com

At last year’s tournament, a record 77 players of all ages battled.

In the girls’ under-14 years old group, Roysha Mougal was the grand winner with 5.5 points, while Novin Pillay garnered 7 points to finish first in the boys’ group.

In the girls’ under-18 competition, Dania Dupres was the winner after collecting 4.5 points following a tie-break match with second-placed Sekar Kivaya who also finished with 4.5 points.

In the boys’ group, Angelo Bistoé was the grand winner with 6 points, after winning his tie-break match against Harish Pillay who also finished with 6 points.

In the female open category, Jeanne-d’Arc Abel finished top with 4 points, ahead of Rachelle Hoareau and Dhivya Pillay who were second and third respectively, both with 3.5 points.

The open male category was won by Andre Stratonowisch with a total of 7 points. He finished ahead of Ragul Pillay who accumulated 5.5 points to secure the second overall spot and third-placed Andrei Balabanov who also collected 5.5 points.