Truth commission warns witnesses, complainants, perpetrators of its enforcement powers to summon those who fail to turn up for hearings | 09 October 2019 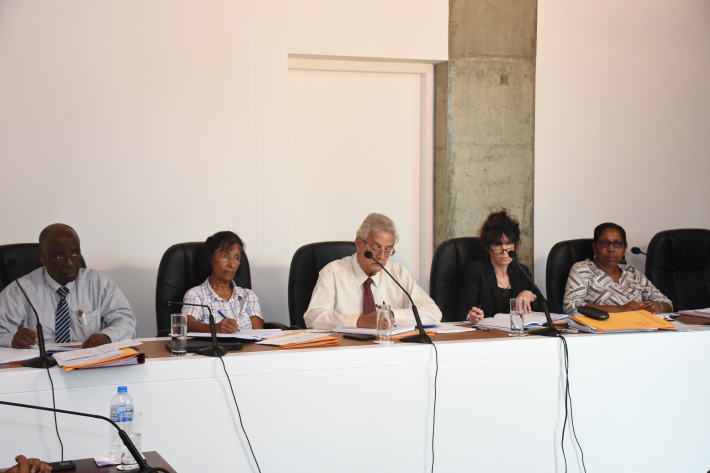 Situated in its new location on Ile Persévérance, the Truth, Reconciliation and National Unity Commission yesterday continued hearing evidence pertaining to numerous cases of alleged human rights violations committed during the 1977 Coup d’Etat and the following years in which Seychelles was a one-party state.

On the session’s programme to appear before the commission yesterday were five witnesses and three complainants.

The first three witnesses – Robin Albert, Evans Coralie and Jourdan Nibourette – to start the session yesterday morning, declined the request of the commission to appear in case 007 related to the imprisonment of Angelin Labiche in cube cells at the L’Exile army camp at Sans Soucis.

On the acquisition of his land at La Misère, Lewis Betsy claimed to be a victim of human rights violation from the 1977 coup era as put before the commission, citing it was done in the time when Dolor Ernesta was the minister in charge for lands.

Appearing as a witness yesterday, Mr Ernesta said he has no knowledge of the acquisition of the parcel of land belonging to Mr Betsy and he was not the minister at that time in 1984. He said that when he was a minister for community development from July 1993 he doesn’t recall either of any land being acquired from Mr Betsy.

Mr Ernesta explained though that it was the court that gave a ruling in favour of the then Seychelles Housing Development Corporation (SHDC) in 1984 for repossession of the land as Mr Betsy, who was in exile in the United Kingdom, was in arrears with the repayment of a R45,000 loan taken from the SHDC to build his house and this had amounted to around R63,000 with the 7.7% interest. The land has since then lay dormant with no development.

He noted that even though in the UK, Mr Betsy was well aware of the court order as he was notified by the then lawyer of SHDC, Bernard Georges.

Mr Ernesta further explained that in 1992, Mr Betsy showed an interest in repossessing the land and had asked the SHDC for a 14 to 21 days extension for the start of the re-payment of the loan, a request that was granted in good faith, according to him, but was never abided to. Mr Ernesta who was then the minister for lands in July 1993 said that SHDC was being pressured by its foreign lender, the World Bank to put in order its accounts book which include retrieving outstanding loans from bad debtors and that was how Mr Betsy’s land was sold as per the SHDC Act to retrieve the money it had lent to him.

Mr Ernesta said that it was SHDC with the approval of the ministry that sold the land to Serge Monthy in April 1994. He said that the land was not sold between friends or whatsoever as Mr Monthy was among other people who showed interests in buying the land and he was the only one who had the cash available during the period of time allocated.

He acknowledged that Mrs Betsy did come to see him in 1994 regarding the sale of the property and the Betsy family was offered to fill an application to obtain a plot of land from the land bank.

Mr Ernesta claimed that out of arrogance, Mrs Betsy told him bluntly to stick the land up his butt without knowing that government was going to issue them with a plot of land had they filled the land bank application form.

Case – 001: Dorothy Chang Him, PMU armoury and being tied up

In the afternoon session, Michel Roucou appeared before the commission because on September 10, 2019 he was named by Percy Dingwall as being one of the police officers on duty at the Police Mobile Unit on the night of the coup on June 5, 1977.

Mr Roucou said that he was present and he was in the presence of another colleague officer Berard Jeannie who was replacing another officer. He said that after a night patrol of the compound he returned and while having a snack and chat with Jeannie at around 2am, he heard a gunshot and instantly witnessed the head of Jeannie burst open and he fell face down on the table where they were sitting, opposite each other.

At that moment, he continued, two men burst in, which he claimed were Philip Lucas with a gun in hand and Donald Bertin (a.k.a Kadede) who was carrying a rope. Bertin tied him to a chair in the corner, stuck his mouth with tape and they later went outside. A third person, he claimed he did not recognise, also came in behind Lucas and Bertin, smashed the glass window and left. He said he does not know who shot Jeannie as the shot came from outside. He said that the gun that was with Lucas was not part of the armoury.

Mr Roucou said that he was also tied up to the chair in the same room as the dead body of Berard Jeannie, and he only heard gun shots and noises of unknown persons from outside and that was all. He was not even aware what was happening or if a coup was being staged. He claimed Percy Dingwall was also present at the PMU on that day, under the pretense that he was looking for some mangoes.

Mr Roucou explained that he does not even remember how his hand got to be untied which he may have done so by himself. With the arrival of his superior, Mr Roucou went outside to witness the armoury which had been ransacked. He noted that nobody from higher up ever talked and asked him for evidence on the incident and he also knew nothing relating to the death of Davidson Chang Him.

Yesterday’s afternoon session also heard Purvez Udwadia voice out his complaint to the commission on being unlawfully detained for three months since April 1978 and mistreated by the government in power on the assumption that he was planning a coup d’Etat.

This resulted in the loss of his shipping business and family island property which he is seeking for compensation while asking for the assets of those who benefited from the coup to be seized and distributed among the people.

Mr Udwadia said he was put under house arrest upon his release from detention and was forced by the authority to leave the country or else something would happen to him if he stayed back. He went into exile in Mauritius for nine months before moving to permanent exile in the United States of America.

He explained that it all started on April 29, 1978 when three policemen came to his father’s house at Le Chantier to inform him that the police commissioner, James Pillay, wanted to see him.

The time was around 6pm when they took him from Le Chantier to the Central Police Station where upon arrival, the commissioner without any explanation served him with an arrest warrant and asked his officers to take him to the Union Vale Prison to be detained.

Mr Udwadia said that apart from him, some members of his family were also threatened and mistreated by the regime in power. He noted that Alphonse Island is one of the most significant family assets taken by the government which the family is fighting the case in court and which has been going on for two years.

Meanwhile, Jean-Baptiste D’Offay de Rieux of case 0095 did not turn up for the afternoon session where he was supposed to appear as a complainant. 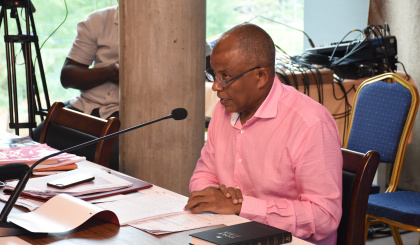 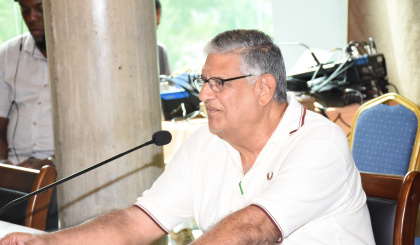 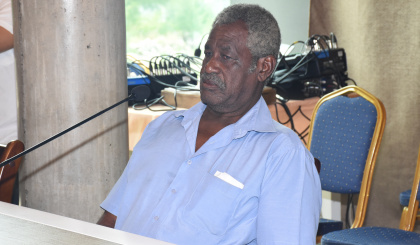