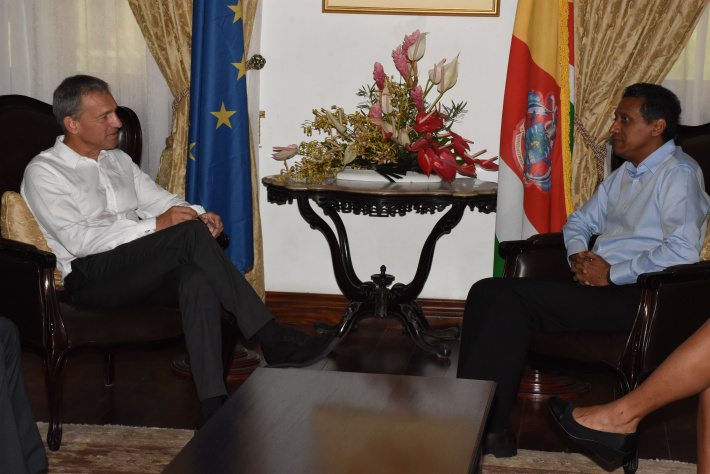 Vincent Degert, the new Ambassador of the European Union to Seychelles, speaking to President Faure at State House yesterday

Cooperation between Seychelles and the European Union, namely climate change and trade relations are some of the key areas, newly-appointed Ambassador Vincent Degert will focus on during his tenure.

Mr Degert, the new Ambassador of the European Union to Seychelles, presented his credentials to President Danny Faure at the State House yesterday morning.

"I would like to thank the European Union for all it has done for Seychelles. It has stood by us in good times and in bad times. We look forward to working with you in existing and also new areas of cooperation. The European Union is like-minded, and we share a lot of common values, such as the utmost respect for democracy and rule of law. I look to the European Union to continue providing the necessary support in terms of capacity building to consolidate what we have achieved together,” said President Faure.

Ambassador Degert, who is on his first visit to Seychelles, joined the European Commission in 1987 and has occupied several posts within the commission before being appointed Ambassador of the European to Mauritius on September 18, 2019.

Speaking about climate change, Ambassador Degert acknowledged how climate change is affecting all islands particularly Seychelles and the surrounding islands, so they discussed how the European Union can work on furthering the climate change agenda on the international scene for instance by pushing for lower gas emissions, as well as locally. In line with this, Ambassador Degert will be undertaking a site visit to the climate adaptation project on La Digue on Thursday.

“We have been signing trade agreements 10 years ago and just last week, we decided all five countries within the region and the European Union to move this partnership one step further to this comprehensive partnership agreement by tackling also services that can be incorporated into the agreement. Seychelles has been one of the key benefiters of this agreement. I think 50 percent of your exports to the European Union have been rising in this respect, so this is good news I think for all the producers here. Seychelles is the second biggest importer of fisheries products to the European Union so that’s another element and today we are still discussing our new fisheries agreement that will be announced soon,” Ambassador Degert stated.

On defence operations, Ambassador Degert conveyed his gratitude to the government of Seychelles for supporting the European Union defence operations located on the horn of Africa and for the judicial system which allows for pirates to be tried and maintained in detention.

“The relationship is really very intact. I am very thankful to the Seychelles that our boats can stop here and refuel and people can even go on shore, so this cooperation is very good because it means that we are bringing peace and stability into the region. Fighting piracy is a key priority,” noted Ambassador Degert.

“But we know also that there are new threats that are emerging, all kinds of trafficking are happening, illegal and unreported fishing activities as well so we need to work together to beef up our capacities to exchange information, not only with Seychelles but also with other countries here in the region – Mauritius, Madagascar, Zimbabwe – so we can work on all these threats together. My mandate in this respect is to try and raise the level of cooperation between all these actors here in the region and I want to thank Seychelles for its very clear and very strong support,” Ambassador Degert added.

He is also expected to join President Faure in inaugurating the Broodstock Acclimation and Quarantine Facility (BAQF), also being funded by the European Union as part of the exiting Fisheries Partnership Agreement.