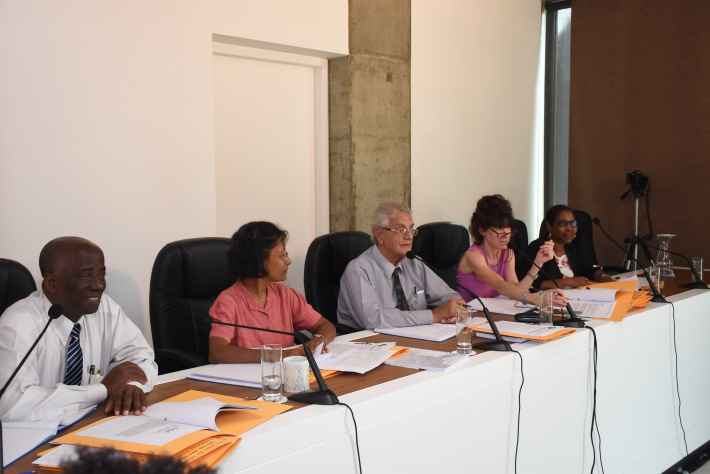 The Truth, Reconciliation and National Unity Commission yesterday heard evidence from four witnesses and complainants, despite seven witnesses being scheduled to appear.

The shooting of policeman Berard Jeannie has been heard by the commission after numerous witnesses brought up the matter in explaining the circumstances and events surrounding the Coup d’Etat of 1977.

Yesterday morning, the brother of Berard Jeannie, Rock Jeannie officially brought the complaint before the commission explaining what he knows and has been told about his brother’s shooting, in addition to his own experience of victimisation following the death of his brother.

He started off by noting that on the afternoon of June 4, 1977, he, a fisherman at the time, saw his brother Berard, who was then aged 28, on his way to work. He consulted his adoptive mum as to where he was going since he was supposed to have the day off but his mother informed him that Berard has been called to replace another officer identified as Payet who was to attend a wedding that evening.

An emotional Mr Jeannie continued on to state that during the afternoon of June 5, one of his cousins called out to him hysterically and he and his mother were then met by three police officers at her house, one of whom informed them that “Mr Rene has conducted a Coup d’Etat and your bother has been killed” but they could not provide the family with any further information about the incident.

Contrary to the accounts given by previous witnesses, Mr Jeannie noted that Berard’s body was never transported to the mortuary, but was instead placed at their father’s house at Anse Aux Pins. From there, they transported it back to their family house at Anse à la Mouche, before a small and somehow improper funeral service was held on June 6, due to the curfew in place.

Mr Jeannie alleges that the officer identified as Payet, also an officer of the paramilitary unit is somehow responsible for the death of his brother as he was aware that the Coup would take place that day.

He pointed out that on several occasions, he has tried to seek justice for the death of his brother by exploring different avenues but to no avail. He also noted that he repeatedly spoke to other officers who worked alongside his older brother including Michel Roucou and others who have appeared before the commission, and presented the commissioners with two USB drives, which he claims contains files, presumably voice recordings by Percy Dingwall, detailing how Berard was allegedly shot by Lucas.

Mr Jeannie also proposed that the government should pay damages and compensation for the death of his brother.

The commission acknowledged that Mr Jeannie has been deeply affected by the death of his brother.

Mr Jeannie also detailed the second part of his complaint about how he felt victimised years after his brother’s death.

According to him, he was in 1994 granted a license by the planning authorities to for the construction of a butcher’s shop on his land as was promised in a letter by then Minister for Lands Dolor Ernesta that if he supported the party in power, he would be sold 3 acres of land. He managed to open the butchery 3 months later on December 20, 1994 and he even supplied meat to the State House during former President Albert Rene’s reign.

“But I was punished by James Michel who informed Willie Confait to shut down my butchery in a letter dated March 20, 1995,” he said.

James Michel was the Minister for Finance at the time. He was also informed that he had until April 4 to sell all his big stocks on account that the land was not agricultural and that subsequently, he spent a lot of money to challenge the decision in the courts but to no avail, even if he appealed the decision of the court, as he claims there was interference with the court case.

Mr Jeannie further stated that five years later, he approached another lawyer, Mr Hodoul to discuss the issue of the loss of his business but that shortly after discussions, he was contacted by Andre Pool, the member of the National Assembly for Anse Boileau who offered him some form of reconciliation for his butchery until his license was returned to him by former President Rene a few years later in 2000.

Mr Jeannie requested that the Seychelles Licensing Authority (SLA) should also compensate him for his losses from the business and attributes being targeted to being politically affiliated with the opposition party.

According to Mr Jeannie, he has not purchased the land and is neither leasing the land where his butchery is located. The plot has since been subdivided into smaller plots including a plot of 2000 square metres where the butchery is situated.

In relation to his daughter’s education, Mr Jeannie noted that his daughter left to study sciences in Australia and was promised a plot of land. However, during her absence, he was informed by an official working in the government that his daughter should not return home from Australia as approval has not been granted for her to purchase the land.

The commission resumed its afternoon session by hearing a complaint in closed session before Bernard Georges, the lawyer who represented Anthony Hunt in his legal battle for his property which was acquired by the government in the national interest in June 1986.

As per Mr Hunt’s complaint, the compensation paid for acquiring his property, C1413, was inadequate and that his subsequent claim for compensation failed on the grounds that he failed to abide by the time requirements of the transition provisions set out in section 7 of the Seychelles Constitution.

Mr Georges noted that he is no longer in possession of the file on Mr Hunt’s property as he handed it over to Mrs Hunt a while back when she was seeking legal advice elsewhere but recalled numerous details pertaining to the case.

Mr Georges noted that a claim for compensation was filed, compensation negotiated and compensation paid although he had no details of the dates and amounts paid. He noted however, that compensation was paid within the constraints of the Lands Acquisition Act, which as claimed by other complainants, its method of valuing was often not reflective of the real value of the property. It would appear that at the time, it only allowed infrastructure on the land to be valued with very little to no value placed on undeveloped properties.

He further added that he drafted a letter including a list of his clients and it was received by Ms Mellie, the interlocutor and director of lands at the Ministry of Lands, including the claim for review for Mr Hunt within the stipulated timeframe. Of several dozen clients he represented, Mr Georges noted that some claims remain unresolved.

Mr Georges made mention of other instances where land had been compulsorily acquired by the government and where inadequate compensation payments were made. Often times, large properties of several hundred acres and even up to 1,000 acres were acquired and compensation would not be paid in cash, but rather, stretched out over a long period of time.

“Certain people were targeted because of their political affiliation, certainly. Other properties were acquired because there was a need for all or part of it,” he explained.

Mr Georges made note of several letters he sent to responsible authorities and the president urging them to act upon the constitutional commitment. On his lists, he suggested that Mr Hunt of Anse aux Poules Bleues was to be considered a priority.

David Lebon was requested to appear before the commission in relation to the complaint brought by Mr Chang-Seng, in which he alleges that May 16, 1986, he was forced to go on leave and the principal secretary of the Ministry of National Development told him to stay away from the survey division before he was terminated.

Mr Chang-Seng also claimed that he wrote to the president seeking the rationale behind his dismissal and he was informed in a letter dated August 19, 1986 that his service was terminated in the public interest and that he subsequently could not get any jobs.

Commissioner McIntyre referred to a “wonderful reference letter” written by Mr Lebon on April 13, 1983 regarding Mr Chang-Seng’s work in the survey division.

Mr Lebon read a report he compiled about Mr Chang-Seng and recalled that Mr Chang-Seng was the first person to be trained in the survey division before he left for a better position in Bahrain. He recalls Mr Chang-Seng as a good and hardworking employee.

The TRNUC will continue hearings today with evidence from Max Racombo, Dr Jude Gedeon, Jourdan Nibourette, Paul Michaud and Jessie Laporte amongst others. 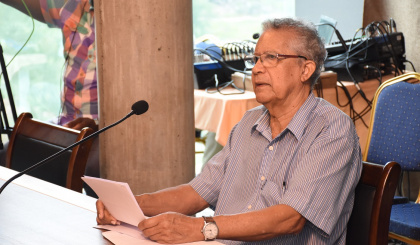 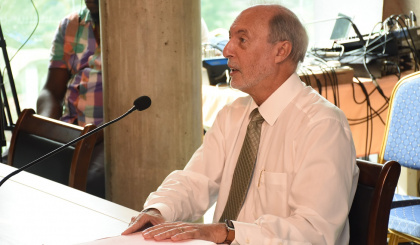 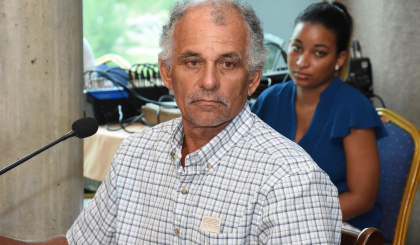