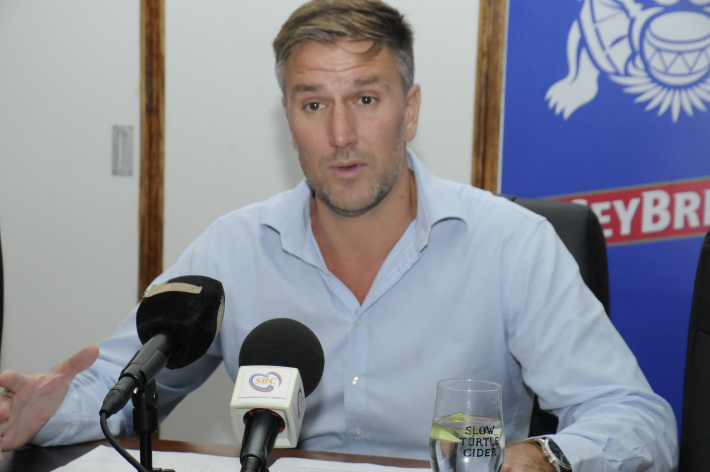 In a press conference held at O’Brien House yesterday morning, managing director of SBL, Nick Cook, attributed the good performance to the impact of strategic initiatives taken by the board and management, including continued investment in supply chain driving world class quality, up weighted investment in people and building capabilities, innovation, increased investment in its brands, including the flagship Seybrew and Seypearl brands.

“I can tell you that I am very proud of the results. Our top line growth was 12.5 percent and if I put that into real term figures, that’s R422 million, which is up from R375 million the year before. And to put that into even more context, the prior year before that was R135 million. So we’ve put on nearly R87 million in the space of two years and I am really proud,” Mr Cook started off.

Referring to investment in SBL’s brands, Mr Cook noted that three years ago, less than 1 percent of the turnover was invested in brands but this year, SBL is looking to invest over R18 million in its brands.

In terms of revenue growth, SBL registered overall revenueof 12.4 percent as compared to 11.9 percent in the financial year 2018 with strong growth being recorded for all categories over last year.

Beer revenue increased by 9 percent in F19 (14 percent in F18), underpinned by improved supply and a high standard of merchandising in trade.

“It makes me immensely proud to see our beloved Seybrew growing year after year in the face of strong competition from imported brands. I am also delighted to report that Seybrew Draught revenue increased by 53 percent in F19”.

Mr Cook noted that the main issue faced by SBL in the beer market is high-strength beer containing 8, 12 and 16 percent alcohol content and that it is working with the government to address this through the National Alcohol Policy.

Revenue from carbonated soft drinks (CSD) increased by 10 percent in F19, of which Seypearl was 20 percent driven by better activation and improved supply.

Revenue from the ready-to-drink (RTD) range which includes Smirnoff Red Ice and Black Ice registered 95% growth versus last year. This was driven by the successful re-launch of Smirnoff Ice in the newly designed bottles and maintained stock levels.

SBL’s spirits portfolio registered growth of 6% driven by newer pack sizes and improved merchandising in trade. However, SBL continues to be impacted by parallel importation by non-Diageo importers, much of which is without the payment of taxes and duties.

Mr Cook urged customers and clients to purchase spirits from SBL on account that the spirits which they import are genuine.

“We saw a gap in the market with Savanna and Hunters and decided to enter the market. We are very proud of the fact that the whole of SBL pulled together to get distribution to over 90% of shops in Seychelles in under 2 months,” Mr Cook noted.

He further added that the Seypearl Pineapple, the first low sugar variant led the way under the local Seypearl brand. Mr Cook noted that SBL will continue to innovate in that space in the years to come by introducing new flavours. Furthermore, the SeyPearl Tonic and SeyPearl Ginger Ale were repackaged, and the portfolio expanded with SeyPearl Sparkling water branded under SBL’s premium mixers rage. He noted that Ginger Ale in particular was warmly welcomed back, climbing to over 4% of SBL’s monthly soft drink volume by the end of F19.

He also launched an appeal to customers to return glass bottles as SBL is facing a shortage of glass bottles which is used for rebottling.

“Innovation continues to be a key pillar in our strategy, and we have a healthy pipeline of current and upcoming innovations which we believe will excite the trade and complement our Total Beverage Company position,” Mr Cook noted.

F19 was a year of further stabilisation and improvement involving capex, putting the right people into the right roles as well as investing in their development on SBL’s journey to deliver consistency and excellence in everything. A core enabler and driver has been the rigorous adherence to Diageo’s excellence in supply chain management system.

Major Capex investment in a new kegging line, a shrink wrapper of our CSD Line (including a full line overhaul) as well as a new glass line filler installation and new Brewhouse malt intake system were designed not just to improve quality and consistency but also efficiency of production.

The overall business improvement has been recognised by Diageo Global as SBL was awarded the Most Improved Market of the Year award from a selection of over 100 nominations across 180 markets globally, “a great achievement and something we are all very proud of,” said Mr Cook.

Mr Cook noted however that improvements are still possible and SBL is in the process of embedding productivity across its cost base which started to deliver results during the year. The company also benefitted through relatively stable rupee against the major foreign currencies.

“The investments made so far continue to have a positive impact on operational efficiency and the quality of our products. We see further opportunity to embed productivity as we streamline processes and improve efficiency. We will continue to invest in capital projects to guarantee world class consistent quality and at the same time invest in sustainability of our supply footprint. We will continue to drive rigor in trade execution and reviewing our route to market to ensure SBL brands are available to consumers everywhere in the country. We will continue to activate our brands through effective marketing campaigns and innovate to meet the need of our consumers with new and relevant offerings. All of the above will be achieved through our continued investment in our people and up weighting capabilities,” said Mr Cook.

He revealed that SBL is well on its way to a strong performance for the financial year 2020 and that consumers can expect some exciting things within coming weeks and months.

As for dividends to shareholders, the board of directors is recommending a final dividend of R2.25 per share. This is in addition to the interim dividend of R1.50 paid in June 2019. The total pay-out of R3.75 per share would be an increase of 87.5% year on year and the highest level since 2013.

All shareholders will also be presented with a small token of appreciation in the form of a 6-pack of Slow Turtle cider as well.

“As part of modernising our production plant we have been on an intensive investment plan over the recent years. We have started to see the results of this investment which will be ongoing over the coming years. With the improved performance, the board’s intent is to show steady sustainable dividend pay-out improvement over the coming years,” he said.

Mr Cook concluded the conference by thankingall shareholders for their continued support over the years, many of whom have held shares in the company for several decades. This goes to show the confidence they place in this business and its rich history.

He also thanked key partners including distributors, customers, suppliers, professional advisers among others, for contributing to the success story of the company as well as the government of Seychelles for implementing investment friendly and supportive policies for local manufacturers. 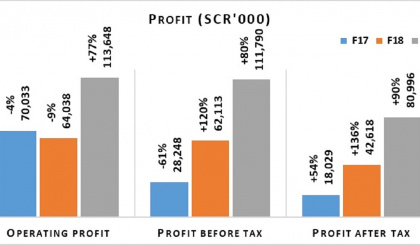 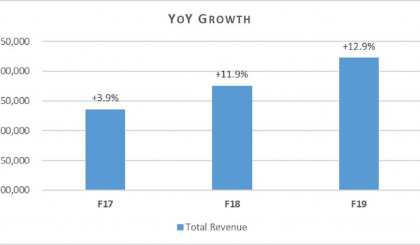