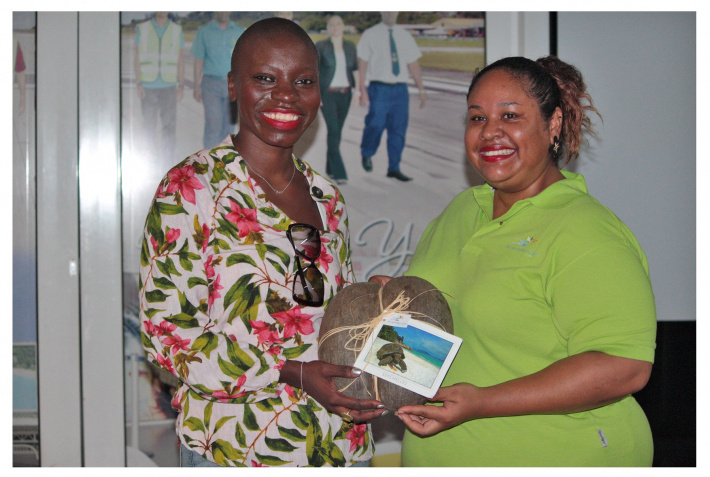 Travelling influencer, Jessica Nabongo, became the first Ugandan and documented black woman to travel the world when she landed in Seychelles on Sunday October 6, 2019.

Seychelles was the last country on her itinerary.

In a recent interview with TODAY in Seychelles newspaper, Jessica said that she considers Seychelles to be one of the most beautiful countries in the world. Accompanied by 50 friends and family members, Jessica has been visiting several of the islands and will end her trip tomorrow at Four Seasons on the private island of Desroches.

In February 2017, Jessica set out to become the first documented black woman to visit all the 195 UN member countries. When she had decided to commit to this quest she was in Bali, Indonesia and had already travelled to 60 countries.

Initially, Jessica planned to complete her mission by May 15, 2019, which was her 35th birthday. However, the deadline was later changed to October 6, 2019, in honour of her late father’s birthday.

Jessica is also the founder of the boutique travel agency, Global Jet Black, which encourages tourism to a number of countries in Africa, the Caribbean, and Central and South America.

Furthermore, Jessica is a keen environmentalist who uses her social media platform to raise awareness on significant causes like the harmful effects of plastic and endangered species. She encourages her followers to try their best to limit negative impact on the planet, sharing tips on how to make small changes in their daily actions.

After having completed her quest, Jessica has plans to keep fighting against plastic pollution in the future.

“The presence of the celebrity traveller in the calibre of Jessica Nabongo on our shores reflects the reach of the destination’s visibility around the world. Ms. Nabongo’s choice to finish her mission in Seychelles is indeed and honour,” said Jenifer Sinon, Seychelles Tourism Board’s deputy chief executive, as she commented on the event.

Jessica wanted the last country on her list to be in Africa in order to embrace her love for the continent.