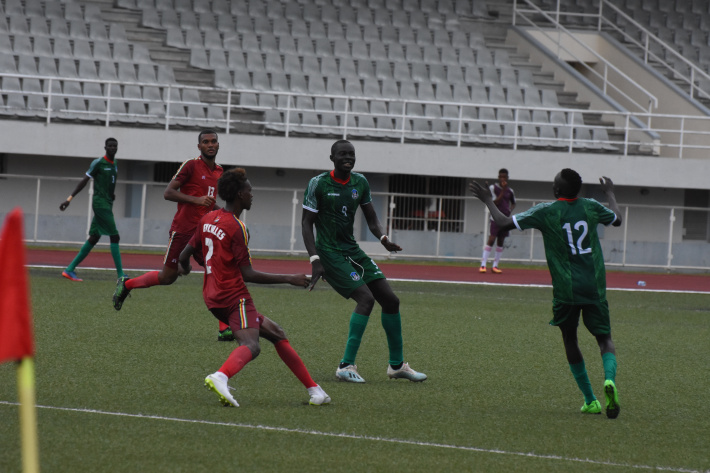 Nayar (no. 12) scored the only goal to give South Sudan the win

Seychelles lose at home to bow out

Seychelles needed to put up a spirited fight to get at least a 1-0 win to progress to the group stage of the 2021 Total Africa Cup of Nations (Afcon) qualifiers, but instead they lost by the same scoreline yesterday at Stad Linite to be eliminated.

Following a narrow 1-2 away loss at the hands of the Bright Stars of South Sudan in the first leg match of pot five played last Wednesday at the Al- Merriekh Stadium in Khartoum, Sudan, the boys of Dutch coach Jan Mack stood a chance of going through. The 0-1 home loss means they are now out of the qualifiers on an aggregate score of 1-3.

Had Darrel Damou scored in the 6th minute, the outcome of the match would probably have been different, but he inexplicably sent his shot crashing against the post when it looked easier to score.

After both teams had cancelled each other out in the first half, the visitors netted the only goal of the game in the 71st minute through Joseph Nayar who was joined in celebrations by teammates.

South Sudan will now join Burkina Faso, Uganda and Malawi in group B of the qualifiers.