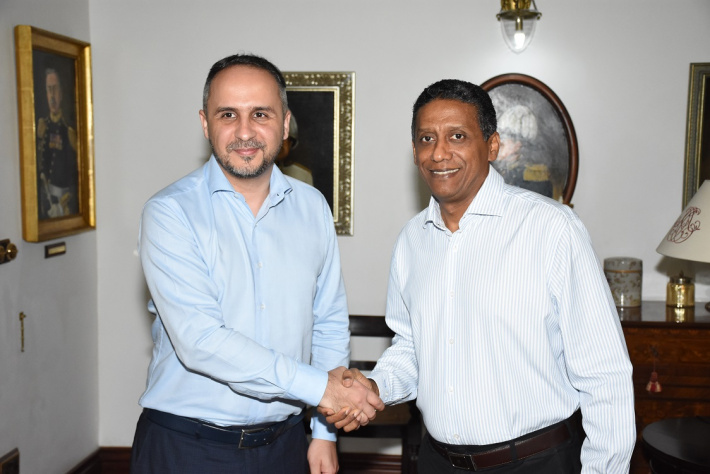 Newly appointed Serbian ambassador to Seychelles, Alexander Ristic, yesterday presented his credentials to President Danny Faure, in a brief meet at the State House in which they discussed key areas of cooperation between the two countries, notably education and health.

President Faure congratulated Ambassador Ristic on his accreditation and expressed his wish that the strong ties of cooperation between Seychelles and Serbia continue to flourish.

“Your accreditation today is a powerful sign of the commitment of our countries to deepen our engagement. In reiterating our sincere congratulations and in wishing you great success in your new tenure, rest assured, Seychelles is committed to further cementing the good friendship between our nations,” said President Faure.

Ambassador Ristic, who is based in Ethiopia, highlighted the relationship between the two countries spanning more than 40 years, noting that he had fruitful discussions with President Faure and Vice-President Vincent Meriton.

“The warm welcome by the president and vice-president shows that we are true friends and that we can work together in many fields. In the past, we have supported each other and have had fruitful cooperation in many areas and as you might know, many people in Seychelles studied in the former Yugoslavia, which is now Serbia, in our universities, who came back here and continued developing their country,” said Ambassador Ristic.

“We are very well connected and we have a strong people to people connection between our two countries and my task is to improve our cooperation in the possible fields in which we can work together,” Ambassador Ristic stated.

He further noted that together with President Faure, they mutually agreed to strengthen cooperation in the fields of health and education, noting that he will be offering scholarships to Seychellois students for the coming school year 2019/2020.

Serbia was established more than 20 years ago during the Josip Broz Tito era, of former Yugoslavia.

Ambassador Ristic was accompanied to State House by Serbia’s honorary consul in Seychelles, Dr Miodrag Todorovic. Also present for the meeting were officials from the department of foreign affairs.