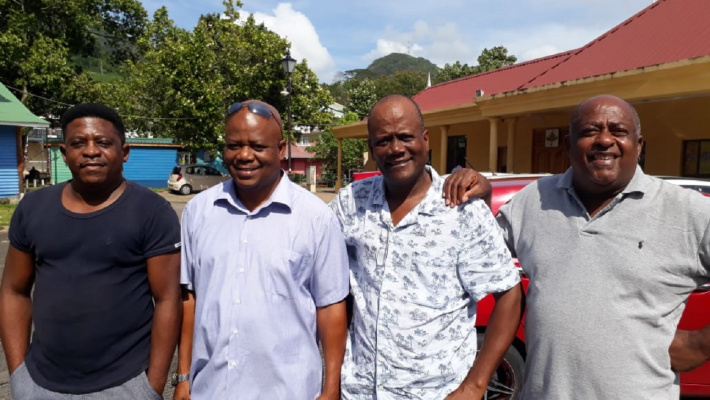 (L to r) Cyril Vital, Mervin Camille, Nigel Henrie and John Vital will be taking part in the Creole festival organised by the Seychellois community in Australia

With the Creole Festival fast approaching Seychellois are getting ready for the week-long celebration. Like last year, the eight hundred plus Seychellois living in Australia is getting ready to celebrate the festival alongside their Seychellois counterparts.

To bring a little bit of the Creole spirit to the Land Down Under, four Seychellois artists – Nigel Henrie, John Vital, Cyril Vital and Mervin Camille – leave Seychelles today to take part in the festival which will run from October 22 to November 16.

“As a visual artist, I will be bringing art pieces that showcases the culture of Seychelles such as our ocean, the fauna and flora,” said Nigel Henrie.

The Seychelles Tourism Board provided the artists with promotional pamphlets

that will be given out during the festival.

It is the first time that Mr Henrie will be showcasing and selling his works in Australia and also the first time an art exhibition will be included in the festival.

John Vital, a musician that will be participating in the festival, added that festivals such as this one is important as it exposes Seychellois artists internationally and open doors.

He has called for other Creole communities in other countries to organise similar Creole festivals like this one.

The group will also be representing Seychelles in another Creole festival that same month which will see the participation of other Creole speaking countries.

“We will be acting as ambassadors for Seychelles and promoting the Seychellois culture and heritage throughout the month,” added Mr Henrie.