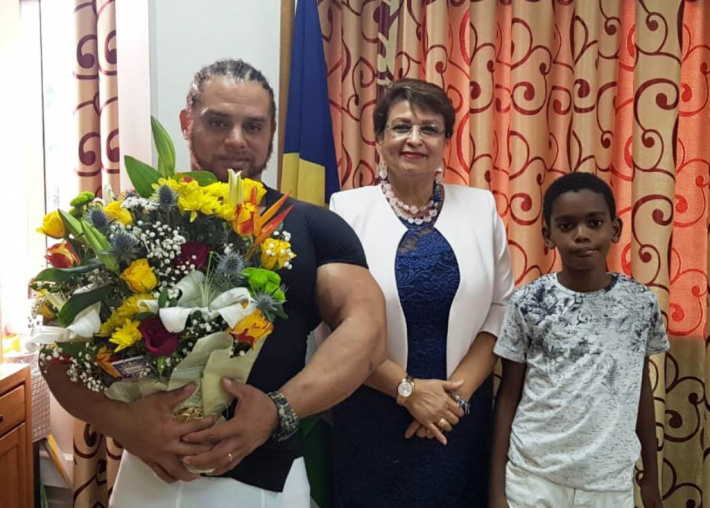 Designated Minister Macsuzy Mondon, in her capacity as the minister for sports, has met with Seychellois professional bodybuilder Ziad Meckdachi Al Adou to congratulate him on his achievement and discuss his future plans.

Mekdachi is the first bodybuilder in the Indian Ocean to bear such a title and for him this means a dream come true.

For Mekdachi though this does not mean the end as he is looking forward to compete against professionals in his category. There are three upcoming competitions next year, namely in Rio (Brazil), Miami (United States of America) and South Africa and he is yet to decide which one he will take part in.

The meeting was held in the Designated Minister’s conference room at Independence House Annex. Mekdachi was accompanied by his son Omar, who also requested to meet with the minister as he is also proud of his father. Also in attendance were the principal secretary for youth and sports Fabian Palmyre and the special advisor for youth Kevin Vidot.

Mekdachi, 39, won his elite pro card after winning the 100kg category and the overall prize at the 4th Arnold Classic Africa 2019 IFBB (International Federation of Bodybuilding) pro qualifier organised by the IFBB Europe inside the Sandton Convention Centre in Gauteng, Johannesburg,South Africa in May this year.

In his discussion with Designated Minister Mondon, Mekdachi said he is also seeking sponsors from private businesses to help him as practicing this sport costs him a lot financially as he needs to buy supplements, follow a good diet, pay registration fees for competitions, air tickets and accommodation. He currently holds a corporate social responsibility (CSR) certificate.

Designated Minister Mondon has requested that Ziad submits his projection of his expenses for next year and that she will start discussion with the Seychelles Bodybuilding and Physique Association (SBPA), National Sports Council and the government on how to help him.

She is also calling on private businesses to help the professional bodybuilder as the country’s policy caters for amateur and semi-professional sportsmen and sportswomen.