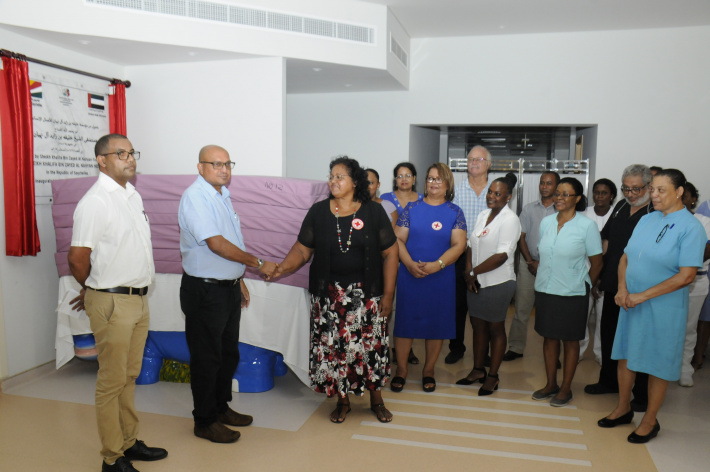 The Red Cross Society of Seychelles yesterday officially handed over a donation of 20 new mattresses for use at the Women’s Hospital, located at Perseverance.

The mattresses are said to be worth over R80,000 and comes after complaints made by some patients at the Women’s Hospital that the mattresses that were being used were not comfortable.

Barbara Carolus-André, a founding member of Red Cross Seychelles, was admitted to the hospital last year and got to experience the discomfort first-hand, an experience which propelled the donation.

“I was hospitalised here and taken good care of, but I felt that there were a little more comfort needed in terms of having to stay in bed for long periods. The conditions of the mattresses needed improvement so, as a volunteer of the Red Cross, I decided to approach my organisation to participate in some fund raising,” Mrs Carolus-André explained.

Red Cross was successful in its fund-raising initiative which enabled it to purchase 20 mattresses although its initial aim was 30 mattresses.

President of Red Cross, Kishnan Tamatave, stated that the non-profit organisation hopes to donate 10 more mattresses in order to meet its aim.

Mr Tamatave has called on the support of any individual, corporation or organisation to help fund the project.

It was Dr Kenneth Henriette, director of the Seychelles Hospital, who gratefully received the 20 mattresses on behalf of the Health Care Agency (HCA).

Dr Henriette noted the long-standing partnership between the Ministry of Health and the Red Cross Society, which has spanned over two decades and a large number of ventures.

Some of these ventures have gone on the backburner, such as blood donation and recruitment of donors, but many other collaborative initiatives have succeeded.

“We plan to interact in closer partnership for issues that will be coming up in the future such as disasters and emergencies. It is not the first time that the Red Cross holds our hand and it means a lot to us because we know that it is not just a one-time thing;; it is continuous,” Dr Henriette stressed.

Yesterday’s brief ceremony was attended by the staff of the Health Care Agency and the Women’s Hospital and volunteers from Red Cross.

Sponsors for the 20 mattresses were Eden Island, UCPS, the Choral and Music Society, the Carolus family, Michele Martin, Peter Brinn and Thyra Faure.