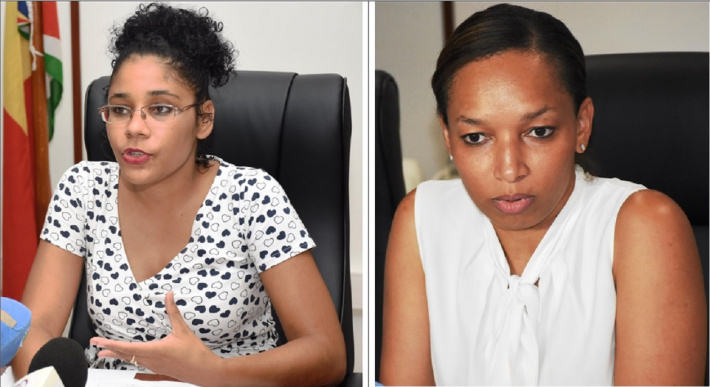 Ms Payet and Ms Morel during the press conference yesterday

Unemployment rate down by 0.1 percent

The unemployment rate for quarter 2 of 2019 is down 0.1 percent from quarter 1 2019 and 1.5 percent lower than quarter 2 last year according to statistics compiled by the National Bureau of Statistics (NBS).

In a press conference held yesterday afternoon principal statistician of social statistics at NBS, Maria Payet, and chief policy analyst at the department of employment Susan Morel explained the labour market statistics noting that despite the unemployment rate for quarter 4 of 2018 being low at 2.1 percent, and 3.6 percent for quarter 1 of 2019, it is the normal trend on account that more people are seeking employment at the beginning of the year including school-leavers who are seeking jobs and are ready to enter the labour market.

It must be noted that the universal definition of “unemployed” refers to persons who are not working or participating in some form of economic activity, who are seeking employment and are ready to start employment within two weeks. Individuals not seeking work are considered to be outside the labour force.

As of this quarter, NBS has also started compiling unemployment data for youths and persons who are considered to be functionally impaired. The Youth Unemployment Bulletin, which applies to youths aged 15 to 24 years old indicates that the unemployment rate among this group has increased from quarter 1 where it was 9.7 percent while quarter 2 is set at 14.3 percent.

“The fact that it increased, means that many more youths are seeking employment. The youth not in employment, or training programme statistics have actually decreased which indicates that youths are no longer as idle as before and that they are actively trying to participate in the labour market,” Mrs Payet explained.

Mrs Payet noted that they will continue to monitor the labour market trends for such groups in a bid to get a more complete picture of the national situation.

Ms Morel from the department of employment noted that the legal working age in Seychelles is 15 years old. However, there are certain restrictions in certain domains such as casinos and bars for which there are age restrictions for persons aged 15 to 18.

Ms Morel continued on to state that there are numerous programmes under the Department of Employment which assists different categories of persons who are seeking employment.

For youths who have not completed formal education, the department offers a skills development programme which caters for youths aged between 15 and 30 years. The programme allows them an opportunity to receive on-the-job training and they receive an allowance from the government.

Furthermore, Ms Morel noted that the introduction of the My First job programme has contributed towards decreasing the unemployment rate among youths. She added however, that not all youths who join the programme are ready to enter the labour market immediately.

As for the Unemployment Relief Scheme (URS) targeted at groups and sub-groups who find it hard to seek employment, for instance recovering addicts and ex-convicts, statistics indicate that the programme has also been successful. According to Ms Morel, 208 participants have so far been placed in employment whether part-time or full time and 8 are now self-employed.